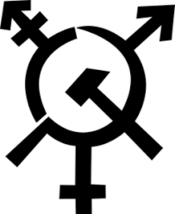 Transgender activism is based on the pseudoscientific claim that a person who feels they have been "born into the wrong body" has special rights, for example, to be addressed with certain pronouns at the threat of prosecution, or the right to use public toilet facilities of their opposite birth gender. Transgender activism also includes the attempts of government and non-governmental agencies to sexualize and recruit small children into the homosexual lifestyle without parental consent.

Radical Lesbian Feminist Academic Janice Raymond ascribed transsexuality to a "Patriarchal Fifth Column", which is "infiltrating womens’ space" and “raping womens’ bodies” in her book The Transsexual Empire - Making of the She Male. Her report, commissioned by the Carter Administration providing health services to transsexuals, effectively eliminated federal and some states' public aid for anything related to transsexual or transgendered conditions.

J. Michael Bailey, a psychology professor and sex researcher at Northwestern University, published a book called The Man Who Would Be Queen which sharply disagrees with commonly proposed transsexual models. Dr. Bailey argued that sex changes are motivated primarily by sexual interests and not by the idea of a gender identity of one sex in the body of the other.[1]

While critical of the common transsexual model, Bailey states in his book that he believes sex changes should be performed. Homosexual transsexuals being extremely effeminate to begin with come into constant conflict against society's expectations, although after taking up the gender roles of a woman, they are then able to express themselves more naturally, and typically integrate with society better afterward. Autogynephiles though, do not integrate better with society after changing to a woman, however, the empirical evidence shows a typical positive change in the person's mental health, despite their regressing from general society.[1]

Other notable people who agree with the position that Bailey presents, are Anne Lawrence, and Ray Blanchard. All of these people have also been subjected to harassment and intimidation by many transgender activists for presenting a model of transsexuality that they find offensive.