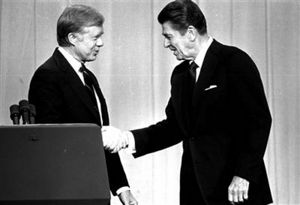 President Jimmy Carter had lost the confidence of America due to economic problems and the hostages in Iran. Although incumbent Presidents usually win renomination easily, Carter had to fight a tough, long primary battle against Massachusetts Senator Ted Kennedy. At the time, several candidates fervently sought the Republican nomination for the Presidency. Former CIA director George H. W. Bush was a leading candidate and led for a time. Former Hollywood actor and conservative two term governor of California, Ronald Reagan, however, badly wanted the nomination and made many more speaking engagements. Reagan was then able to sweep the primaries and win the nomination. One of the other Republican candidates was liberal Illinois Representative John Anderson. Reagan considered having former President Gerald Ford as his running-mate, referred to as the "dream ticket," but Ford wanted more presidential power than Reagan was willing to give him. Reagan instead chose his lead rival, George H. W. Bush, as his running-mate, but ran the risk of giving ammunition to his enemies since during the primary race Bush had referred to Reagan's economic policies as "voodoo economics."

Anderson, not satisfied to accept his defeat, ran as a third-party candidate and gained traction because of his moderate views. Although it is hard to imagine today, at that time the options of Reagan and Carter were considered weak, with many people dissatisfied with the choices.

Carter faced a primary challenge from the more liberal Massachusetts Senator Ted Kennedy. Carter was able to maintain a lead over Kennedy and defeated him with 51 percent of the vote to 38 percent. After a messy floor fight, Carter was re-nominated; to show a spirit of unity Willie Nelson, who in 2003 hit the top of the Billboard charts with a song celebrating public lynchings,[1] sang the national anthem at the Democratic National Convention.

Reagan was able to do better than Carter in their speaking appearances, which culminated in a live Presidential Debate between the two candidates shortly before the election. Reagan used Carter's own words against him when he brought up Carter's use of the term 'the misery index' to describe the suffering of the American people when he was running for President against Ford in 1976. Carter defined it as the sum of the unemployment rate and inflation rate. Unfortunately for Carter, the value of the misery index, which he had charged in 1976 was too high, was much higher in 1980 as Reagan pointed out. Reagan then boldly asked his audience at the end of his debate with Carter, "Next Tuesday all of you will go to the polls; you'll stand there and make a decision, it might be well if you would ask yourself: Are you better off than you were four years ago?"

President Carter faced a difficult reelection. Iranian Islamists were holding 53 members of the American embassy staff hostage and the rescue attempt had failed miserably, Castro flooded Florida with Cuban refugees, there was a national oil shortage resulting in increased gasoline prices, high unemployment, and 18 percent inflation. Reagan ran as a Washington outsider as the Republican nominee. The centerpiece of the Reagan campaign was his record as an effective Governor, where he is credited for reducing California's deficit while lowering taxes, and pointing out the failures of the Carter administration. Reagan's campaign gained strong financing support from political action committees (PAC), receiving $12 million from PAC's, compared to $50,000 on Carter's behalf. Carter tried to cast his presidency in the best possible light, stressing the 1978 Camp David Accords between Israel and Egypt. He portrayed himself as a peacemaker and Reagan as a warmonger. Although because of Reagan's cool and confident manner, and use of effective neologisms such as "There you go again", these portrayals proved to be ineffective.

While the polls had been showing a close race up until a week before the election, when the election finally came up, Reagan held a surprisingly strong victory. Carter capitulated while voting was still going on in the west, which angered his party as many Democratic Congressmen lost their elections after that and blamed Carter for his premature announcement that caused a number of Democratic voters not to go to the polls.[2]