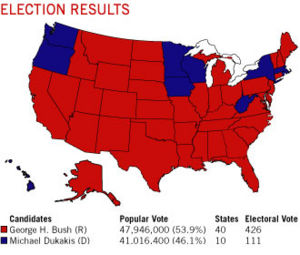 As President Ronald Reagan's second term in office was coming to end, his Vice-President, George H. W. Bush, decided to run for the Presidency. He was criticized more than his predecessor, but he was still very popular among Republicans. He managed to win the Republican nomination for President in a difficult primary battle with Senator Bob Dole. To run against Bush the Democrats nominated Massachusetts Governor, Michael Dukakis, who won in a less heated campaign. Both of the candidates ran hard and sincere campaignes. During them Bush won great support with several promises which involved no new taxes.[1] Ultimately, his hard work in Government, his promises as a candidate, and family-values standards won Bush the Presidency.

Although Vice President Bush campaigned under the shadow of the popular President Reagan, who left office during a time of national optimism, he trailed in the polls throughout the summer because of issues such as the large federal deficit, the Iran-Contra affair and an October 1987 stock market collapse. However, he managed to close the gap by fall of the campaign. With the Cold War at its height, Bush focused on his foreign policy experience as a member of the U.S. military, ambassador to the United Nations and eight years as Vice President. In response Democrats criticized Bush's selection of Dan Quayle for Vice President as being too inexperienced. Michael Dukakis offered a traditionally unabashed liberal vision of increased government on health care, education, and housing as the press swooned over his 'Massachusetts Miracle' which George Bush and the Republican Party referred to as the 'Massachusetts Mirage'. Dukakis' position on crime and capital punishment became a major issue. As governor Dukakis allowed weekend prison passes to criminals with the Massachusetts furlough program, one of whom was Willie Horton—a large, African American convicted murderer who raped a white woman and tortured her fiancé, while he was on a weekend pass. The Bush campaign hit heavily on his furlough program in campaign advertising right before the election. Also, during the second Presidential debate Dukakis was asked:

"If Kitty Dukakis were raped and murdered, would you favor an irrevocable death penalty for the killer?"

To which Dukakis responded: "No, I don't, Bernard. And I think you know that I've opposed the death penalty during all of my life. I don't see any evidence that it's a deterrent, and I think there are better and more effective ways to deal with violent crime." [2]

He also hurt his campaign when he was seen riding in a tank—grinning and looking diminutive in an oversized helmet, resulting in ridicule by the public of having the idea of him as commander in chief.

The electorate was generally uninspired with the candidate selection as the total number of people who went to the polls was less than in the 1984 election. The press tried to dog Bush with a "wimp" moniker during the campaign and then later complained when he used negative advertising. Nevertheless, it removed the wimp idea from the minds of the voters and many of his negative points stuck. An effort by the press to say that he was 'wrapping himself in the American flag' also came up short.

Interestingly, multiple slogans from the Bush campaign became relatively well known in culture. The first was his reference to "a thousand points of light" and the second that tied to the first that he saw a "kinder, gentler nation". Finely, the ominous "read my lips -- no new taxes" that achieved fame later during his Presidency.

David Duke announced his presidential campaign to win the Democratic nomination for the 1988 presidential election. Duke, a white supremacist hated the black civil rights activist Jesse Jackson and his "Rainbow Coalition" and he claimed to command his "Sunshine Coalition" in opposition.[3] Duke lost in his home state of Louisiana to Jesse Jackson.[4] Duke won the 1988 New Hampshire Democratic Vice-Presidential primary in a landslide with 10,531 votes for 99.69% of the vote.[5]