Liberty is the foremost principle and tradition of the United States of America. Libertarian conservatives like myself guard this tradition and principle from fanatic radicals on the left who use it out of context, and misinformed rightests who fall into the same mistake of the leftists in opposing a form of liberty to promote a goal.

Question everything to learn the credibility/uncredibility and legitimacy/illegitimacy of all things.

But accept authority that is legitimate and justified. I.e. don't listen to conspiracy theorists, no matter where they are politically, whether they are lunatic fringe left-wing nutters like the 9-11 Truthers or lunatic fringe right-wing nutters like the Obama Birthers. I oppose Obama for what he has done like raising taxes, increasing America's national debt and dependence on economic assistance from communist China, continuing the bailout of failed companies begun by the fake-conservative/socialist George W. Bush; these are what I oppose Obama for, not some conspiracy theory. 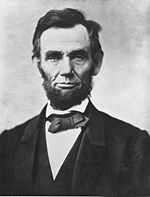 Abraham Lincoln, the founder of the Republican Party and the man who fought a war with the Democrat-led Confederate States of America and abolished slavery that the Democrats defended. Political correctness in America has made the public forget that Lincoln was a Republican. Ayn Rand, a great inspiration for the libertarian right in America. Somehow when left-wing feminists complain about the lack of importance of women in society they always decline to mention Rand.

I am a libertarian conservative. I believe the greatest tradition of the American Constitution is its tradition of individual liberty. The state should have no ability to regulate people's beliefs and associations. I support conservative theorist Edmund Burke's emphasis on traditionalism as a necessity for a society and his denouncing of the anti-traditionalism of the far-left wing of the French Revolution. Originally the French Revolution was moderate and a lot like the American Revolution in that it opposed the tyranny of a tyrannical king. But the French Revolution got taken over by the extreme left-wing nutcase Jacobins who turned the Revolution away from opposing a corrupt king, and into a prototype communist revolution that murdered thousands of people in Stalin-like purges. Burke saw the French being led down a dangerous path away from tradition and into violent fanaticism.

What Burke meant by his conservatism, was not that change was "bad" but that change in all societies requires a connection to tradition, or in more legal terms "precedent", in order for it to rationally advance. The left-wing radicals of the French Revolution that Burke opposed, had completely denounced traditionalism and created a whole new system based on untested ideas that resulted in a descent into mass violence and repression. Burke was right that society needs to be based on tradition that itself is based on experience and not on radical ideals. There were some really stupid ideas though that the French Revolution challenged though, like challenging hereditary aristocracy, a state-run church (I think the state has no business dictating religion), and ending anti-Semitism by allowing Jews to take part in public life in France.

As a libertarian conservative who is proud of the American Constitution, I don't agree with everything I hear in this place or elsewhere from the Christian social conservatives, I agree that all Americans have the right to practice religion, but I don't agree with the state becoming involved in any constitutional amendments on marriage - no matter who is getting married. People should only abide by the rules of the church they are associated with, the state has no business regulating people's belief systems. I agree that the gay rights movement has exploited the whole marriage issue for the purpose of allowing gay people to run for politics on the issue. If the gays want to start their own "gay-friendly religion" where they can get married, let them, that should be their individual right and they should be responsible for themselves, but it is no one's business to challenge the liberty of religious faith in America. The practice of religion is an individual right in America, and people have the right to choose their belief system, that is why our country has various denominations of Christianity as well as other religions such as Judaism. The state should never control religion, it is completely against freedom, just look at Hitler's persecution of Jews, Stalin's persecution of all religious faiths, and Ayatollah Khomeini's persecution of Christians and Jews.

Major Judeo-Christian values lie at the core of American culture, but they should be defended not through constitutional amendments and other threats but through practice. The real war on marriage should be a war for serious marriage and serious parenting of all people, and advocate abstinence from sex as a means for society to avoid young teenage women from having children. We shouldn't tolerate having a welfare system that is doling out money to the many welfare moms who are in that position because they made a stupid decision to have sex as teenagers.

I am tired of hearing liberals note that because some small parts of the American Constitution are obsolete, that thereby the whole Constitution is obsolete. For instance, liberals note that the 2nd Amendment mentions that because one small section mentions that an American citizen has the right to park his horse, that thereby the entire 2nd Amendment is obsolete. That argument is exaggerated, of course the American Constitution was written in a specific time period, but look at what has happened recently when people are not given the right to bear arms, neo-communist Putin rose to power in Russia. Putin is running a tyranny against the wishes of the Russian people - Russian protestors do not have access to weapons and can do nothing against his police state, but if the Russian people could form their own militias, Putin would have been overthrown by now. So there is a darn good reason even today for Americans to have the right to revolt, as for the liberal complaints about some minescule section of the 2nd Amendment about allowing horses to park his horse - they have the right to press for a constitutional amendment to the 2nd Amendment updating the material on the parking of horses to something on cars - I don't have a problem. But if they try to scrap the right to bear arms I will always oppose them because even recent history shows that tyrants can stay in power longer when their is no ability of opposition to seriously mobilize to challenge them.

Facts of life that are proven that some people irrationally do not accept: Napoleon was a supporter of the far left Jacobin militants of the French Revolution. He was a narcissist who believed like most leftists that he would make the world "perfect" based on the French model and soon declared himself emperor for life, and was a ruthless tyrant who inspired Stalin and Hitler.

Two of the world's most ruthless communist mass murderers and dictators, Vladimir Lenin and Joseph Stalin. Stalin killed millions of people, including an intentionally-created famine in the Ukraine.

Many of the worst tyrants in history have been leftists like Napoleon (a Jacobin), Stalin (a communist), and Hitler (a national socialist). The reason why is because leftists want some form of utopia and need to "make" the world "perfect" - and people who seek to lead movements seeking "perfection" on earth. Perfection on earth is impossible, and those who pursue it seek to become god, and hence you get national socialist eugenics, communist class war, and "purging" of opponents to make the "perfect" world.