From Conservapedia
Jump to: navigation, search
Walter Reuther (1907 - 1970) was an American labor union leader, who made the United Automobile Workers (the UAW) a major force for liberalism and high wages not only in the auto industry but also in the Democratic Party in the mid 20th century. At first a fellow traveller who worked closely with the Communists in the mid 1930s, he became a leading liberal and supporter of the New Deal coalition. In the late 1940s became a leading anti-Communist; he supported an anti-Communist foreign policy including support for the Cold War, the Korean War and the Vietnam war. 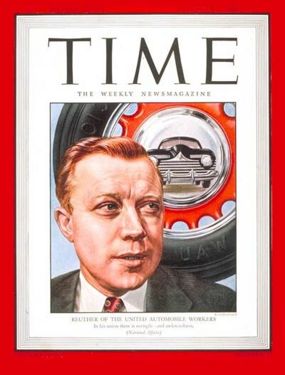 Reuther was born in Wheeling, West Virginia, the son of a socialist brewery worker who had immigrated from Germany. In the fall of 1930, as a student at Detroit City College(which is now Wayne State University), he helped to organize the DCC Social Problems Club which was an affiliate to the League for Industrial Democracy.[1]

In his entire career he was close to his brothers and co-workers Victor Reuther and Roy Reuther. Reuther joined the Ford Motor Company but was laid off as the Great Depression worsened. He and his brothers went to Europe and then worked 1933-35 in an auto plant at Gorky in the Soviet Union. While he collaborated very closely with the Communists, Reuther called himself a Socialist party member; historians believe he was probably an active Communist party member in 1935-36; some evidence suggests he was a Communist party member as late as 1939.[1] He later claimed that he disapproved of the repressive Stalinist regime, but his reports from Russia and his lectures after returning home were enthusiastically supportive. At the end of the trip he wrote, "the atmosphere of freedom and security, shop meetings with their proletarian industrial democracy; all these things make an inspiring contrast to what we know as Ford wage slaves in Detroit. What we have experienced here has reeducated us along new and more practical lines."[2] Unhappy with the lack of political freedom in the country, Reuther returned to the United States where he found employment at General Motors and became an active member of the United Automobile Workers (UAW).

Reuther remained active in the Socialist Party and in 1937 failed in his attempt to be elected to the Detroit City Council. However, impressed by the efforts by President Franklin D. Roosevelt to tackle inequality, he eventually joined the Democratic Party.

In 1936 he became president of tiny local 174 (with 100 members), which on paper had responsibility for 100,000 auto workers on the west side of Detroit, Michigan. Reuther led several strikes and in 1937 and 1940 was hospitalized after being badly beaten by strike-breakers. He also survived two assassination attempts during this period; one attack on April 20, 1948 left his right hand permanently crippled.

Reuther had a highly publicized, almost theatrical confrontation with Ford security forces on May 26, 1937, known in UAW folklore as "The Battle of the Overpass." By this time, thanks to the sit-down strikes, UAW membership had exploded and Local 174 was a power inside the UAW. He worked with the left-wing Unity Caucus (which included the powerful Communist groups) to defeat the conservative president Homer Martin. As a senior organizer, Reuther helped win major strikes for union recognition against General Motors in 1940 and Ford in 1941.

After Pearl Harbor, Reuther strongly supported the war effort and refused to tolerate wildcat strikes that might disrupt munitions production. He worked for the War Manpower Commission, the Office of Production Management, and the War Production Board. He led a 113-day strike against General Motors in 1945-1946; it only partially succeeded. He never received the power he wanted to inspect company books or have a say in management, but he achieved increasingly lucrative wage and benefits contracts. In 1946 he narrowly defeated R. J. Thomas for the UAW presidency, and soon after he purged the UAW of all Communist elements. He was active in the CIO umbrella as well, taking the lead in expelling eleven Communist-dominated unions from the CIO in 1949.

As a prominent figure in the anti-Communist left, he was a founder of the Americans for Democratic Action in 1947. In a 1948 article in Colliers Reuther stated,

He became president of the CIO in 1952, and negotiated a merger with George Meany and the American Federation of Labor immediately after, which took effect in 1955. In 1949 he led the CIO delegation to the London conference that set up the International Confederation of Free Trade Unions in opposition to the Communist-dominated World Federation of Trade Unions. He had left the Socialist party in 1939, and throughout the 1950s and 1960s was a leading spokesman for liberal interests in the CIO and in the Democratic party.

Reuther delivered contracts for his membership through brilliant negotiating tactics. He would pick one of the "Big three" automakers, and if it did not offer concessions, he would strike it and let the other two absorb its sales. Besides high hourly wage rates and paid vacations, Reuther negotiated these benefits for his union: employer-funded pensions (beginning in 1950 at Chrysler), medical insurance (beginning at GM in 1950), and supplementary unemployment benefits (beginning at Ford in 1955). These labor contracts made automobiles more expensive, but since there was very little competition from foreign brands in his lifetime, the consumer paid high prices, the workers took home high wages, and the companies made high profits.

Toward the end of his life, however, when he took the UAW out of the AFL-CIO for a short-lived alliance with the Teamsters union, and marched with the United Farm Workers in California, Reuther seemed to be dissatisfied, looking for the ability to challenge the injustices that had made the union movement so vital in the 1930s. He strongly supported the Civil Rights movement; Reuther was an active supporter of African American civil rights and participated in both the March on Washington for Freedom and Jobs (August, 1963) and the Selma to Montgomery March (March, 1965). He stood beside Martin Luther King Jr. while he made the "I Have A Dream" speech, during the 1963 March on Washington.

Reuther supported Lyndon Johnson on the issue of the Vietnam War, and rallied behind Hubert Humphrey as the Democratic nominee in 1968. That year he counter-crusaded against segregationist independent candidate George Wallace, who was enormously popular among white autoworkers. Reuther warned heatedly that Wallace would destroy all their gains. Reuther mobilized UAW resources to minimize the threat that Wallace would win more than 10 percent of union votes (Wallace won about 9 percent in the North as a whole, and more among union members). Reuther died when his airplane crashed while en route to the unions recreational and educational facility at Black Lake, Michigan.

Reuther appears in TIME magazine's list of the 100 most influential people of the 20th century.