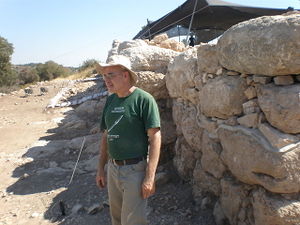 Yosef Garfinkel at an excavation site

Starting in 1975, Yosef Garfinkel first became a part of the Israel Defense Forces, and served there until 1978. Then, between 1978 until 2001, he was part of the Reserve Services.

Garfinkel has also held positions in academic institutions outside of the Hebrew University, even though his main career is in the Hebrew University. Between 1987-1992, Garfinkel was a Research Assistant at the Centre de Recherché Francais de Jerusalem. Between 1985-1993, he was a Research Fellow at the Albright Institute of Archaeology. In 1995, he became a Research Affiliate in Anthropology at Yale University, in 2000 became Visiting scholar at the Ashmolean Museum and Wolfsan Collage at Oxford University, and in 2000 also became Visiting scholar at the McDonald Institute for Archaeological Research at Cambridge University. Finally, academic activity of Yosef Garfinkel also includes being a Curator at the Archaeological Museum in Kibbutz Sha'ar Hagolan since 1994 and Guest Curator of the Bible Lands Museum in Jerusalem since 1999. He also served on the editorial board of the Bulletin of the Anglo-Israel Archaeological Society and guest-editor in the journal Near Eastern Archaeology in 2003. Yosef Garfinkel's book Dance at the Dawn of Agriculture won the Polonsky Book Prize in 2006.

Yosef Garfinkel directed excavations at Khirbet Qeiyafa between 2008-2016, a site that has received significant attention for its significance to the ongoing debate regarding the ancient Judean kingdom of King David, and it's impact on biblical studies. According to some scholars, including Israel Finkelstein, Israel was never the kingdom under King David it is portrayed as in the Bible, and was rather a small, regional, sparsely inhabited agrarian society. The site of Khirbet Qeiyafa dates to between 1020-980 BC,[4] the reign of David, and it reveals a highly centralized administration requiring hundreds of thousands of tons of stones to construct, and a heavily fortified site, and appears to be a city of Judea,[5] under David's rule at the time. This would reveal that David ruled over an entire kingdom in his time, and establish the historical foundations in which the Bible ascribes to him. Some have tried to get around this by suggesting Khirbet Qeiyafa to be a Canaanite site[6] rather than Judean, however it is now well established that the site is Judean,[7] and is most likely to be identified with the biblical city of Shaaraim -- Khirbet Qeiyafa is the only site up until its time to have two gates, and Shaaraim means 'two gates'. Brian Colless says "Khirbet Qeiyafa... has been plausibly identified as Sha'arayim".[8]

Aside from revealing that David ruled over a kingdom in his time, Khirbet Qeiyafa has also yielded the earliest potentially Hebrew ostracon,[9] establishing that Israel had writing at that time. The findings of Khirbet Qeiyafa have been one of the most significant findings to the archaeology of the Bible in a while. Garfinkel concludes that "Khirbet Qeiyafa clearly indicates that historical memories concerning the 10th century BC are preserved in the biblical text."[10]

More recently, an inscription from Khirbet Qeiyafa was recently published in 2015, now known as the ʾIšbaʿal Inscription,[11] an ancient inscription in the Canaanite language relevant to biblical studies. The inscription was of a name engraved on a pot, dating to the 10th century BC. The name inscribed onto the pot has been identified as ʾIšbaʿal/Eshba'al, which is also the known name for one of the sons of Saul, the first king of Israel, Eshbaal (1 Chronicles 8:33, 2 Samuel 2:10 [Ishbosheth=Eshbaal]). Therefore, we can see that the name Eshbaal was in fact a name that existed during the time surrounding the life of Saul, giving further credence to the biblical record. Secondly, this name only appears in this 10th century BC inscription, and no later ones. Yosef Garfinkel, Saar Ganor and Haggai Misgav note in their paper; "In the following centuries, however, any personal name with the element Baʿal disappears from the biblical text as well as from ancient inscriptions from Judah between the ninth and sixth centuries."[12] This indicates that the biblical text could not have been composed at a later period, as names with 'Baal', such as 'Eshbaal' no longer existed during later centuries after the tenth century BC.