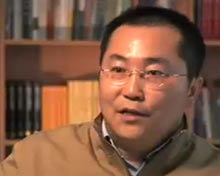 Zhao Xiao is a prominent Chinese economist and director of Macro-strategy of Economic Institute at the Assets Supervision and Administration Commission for China's State Council. His influential studies focus on macroeconomics, corporate reform, and transformation of the market system. Zhao wrote in the Chinese edition of Esquire, God Is My Chairman of the Board which was based on a paper called Market Economies With Churches and Market Economies Without Churches. He would gain attention for arguing that China's economy would benefit from the spread of Christianity.

Jesus in China is a PBS Frontline story asking Is Christianity transforming China? Zhao was interviewed for the story. He says, "I wrote it in 2002. During that time, I went to America to observe and study what kind of differences there are between the market economies of the United States and China. The one fundamental difference I discovered is that, in America, there are churches everywhere." Frontline reporter Evan Osnos asks, "What did you learn in your research?" Zhao Xiao replies,[1]