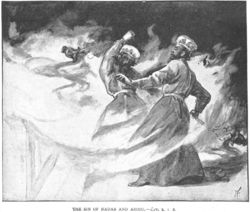 Abihu (Hebrew אֲבִיה֜וּא, father of God) (2480 AM–ca. 10 Zif 2514 AM) (1525 BC-May 26, 1490 BC) was the second son of Aaron and Elisheba. His brothers were Nadab, Eleazar, and Ithamar. Unhappily, he and his brother Nadab committed an infraction of their sacerdotal duties that cost them their lives.

When the Tabernacle was first set up (2514 AM, 1490 BC), Nadab and all three of his brothers were of sacerdotal age, and therefore thirty years old or older. The marriage of their parents is estimated to have taken place in 2478 AM. Abihu, as the second son, was probably born two years later.

In the first year of the journey following the Exodus of Israel, God gave to Moses the detailed design of the Tabernacle, its courtyard, and its various coverings, hangings, and furniture. The tabernacle parts, furniture, and other accessories were fabricated in the first year. On 1 Abib 2514 AM (April 17, 1490 BC), the tabernacle was set up, and the indwelling or shekinah glory of God filled the Holy Place.[1] (Exodus 40:2,17,34 ) On the fifteenth day of that month (the anniversary of the Exodus), the Israelites observed their second Passover.[1]

Beginning in the first say of the second month (1 Zif 2514 AM, May 17, 1490 BC), the first census of Israel was completed.[2] (Numbers 1:1 ) Also, Aaron and his sons began the seven-day period of consecration so that they could begin to perform their sacerdotal duties. On the eighth day, Aaron dedicated the Brass Altar outside the Holy Place by offering the first sacrifices on it. God sent His own fire from heaven to kindle the fire in the altar, and this was the fire that the priests were to use in the performance of their duties.[3] Furthermore, God had commanded that the priests never allow this fire to go out. (Leviticus 6:12-13 )

James Ussher estimates the date of this incident as the tenth day of the second month, i.e. 10 Zif 2514 AM, or May 26, 1490 BC. Nadab and Abihu took coals from their own hearths, instead of the brass altar, and then filled their censers with these coals and use them to offer holy incense in the Holy of Holies. The two brothers ought to have known better, because they had traveled with their father Aaron to Mount Sinai and had seen the glory of God for themselves.[4] (Exodus 24:1,9-10 )

God responded immediately and killed both men on the spot with fire from heaven.

Moses ordered Aaron and the two remaining brothers not to say a word. Moses then ordered Mishael and Elzaphan, two of Nadab and Abihu's cousins, to drag the burnt bodies out of the camp. Then Moses ordered Adam, Eleazar and Ithamar to come into the Holy Place and hear a new law from God: that no priest was ever to enter the Holy Place after having drunk wine or strong drink.