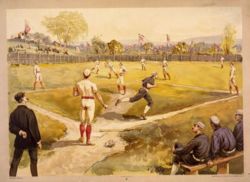 The American League, along with the National League is one of two leagues that play Major League Baseball.

In 2007, the 78th All-Star Game was won by the American League, who extended their dominance of the mid-summer classic. ASG 2007 Through the 2006 season, American League has won 60 of the 102 World Series played.