The Ames Straw Poll also acts as a fund raising event for the Iowa Republican party, in 2007, the Republican Party of Iowa raised over $900,000 by selling 26,000 tickets for $35 each.[2] Voting is open to all party affiliations.[3] Along with the straw poll, attendants are invited to somewhat of a carnival; including barbecues, inflatable playground equipment for kids, music, and supporters rallying for their candidates.[4]

Because of the significance of the straw poll, primary candidates have spent large sums of money purchasing pre-paid ballots for supporters. In 2000, Steve Forbes and George W. Bush each spent over $2 million on tickets and activities for the Iowa Straw Poll.[5] The Iowa Straw Poll has also been a hive for media, with over 250 news organizations on hand during the 1999 straw poll.

The Iowa Straw Poll has acted as a means of narrowing down Republican primary contestants. Lower tier candidates are forced to place high in the straw poll in order to keep up funding from supporters. In 1999, Lamar Alexander ended his primary campaign just two days after the Iowa Straw Poll. In October of the same year, Elizabeth Dole also cut short her campaign after not living up to her supporters' expectations in the Iowa Straw Poll.[6]

Members of any state could participate up until 1999 when organizers decided to allow only Iowans to vote in the poll. Before this procedure changed, candidates bused supporters in from other states to vote.[7]

The 2007 Iowa Straw Poll was won by former Massachusetts Governor Mitt Romney. Conservative Mike Huckabee, the former Arkansas governor, placed second in the straw poll of over fourteen thousand Iowa voters. In 1999 the first and second-place finishers at the Iowa Straw Poll went on to receive over 70% of the vote in the Iowa Caucuses.[8] 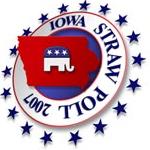 The Official logo of the 2007 Iowa Straw Poll

Some Republican primary candidates stated that they would not remain in the primary race unless they had a good showing at the straw poll. Mike Huckabee, who finished second, before said he would reconsider his race if he did not get in the top half of the straw poll finishers. Tommy Thompson stated he would step down from the race if he did not finish in the top two straw poll spots, one day after finishing sixth he withdrew.[13] The three House members competing, Representatives Duncan Hunter of California, Ron Paul of Texas and Tom Tancredo of Colorado, vowed to stay in the race regardless of their placement in the straw poll.[14]

Mitt Romney, who held a significant lead in the Iowa polls as well as a large amount of funds, came into the straw poll with a huge advantage.[15] Because McCain and Giuliani did not attend the straw poll, Romney was predicted to easily win. In an effort to gain support from Iowa conservatives, Sam Brownback campaigned heavily against Romney's past stance on abortion and alleged that fellow Republican candidate, Tom Tancredo, gave money to a "founder of a Planned Parenthood network" in a negative advertisement days before the straw poll.[16][17]

The Tancredo campaign stated that they do not share values with all their funders and that Tancredo's voting record shows he is clearly pro-life. Former Arkansas Governor, Mike Huckabee, stated that while he believed Romney's current beliefs on abortion, electing Romney would lead to accusations of a "flip-flop", which he says could lead to a Republican loss in the presidential race.[18]

Tancredo attacked fellow candidates Romney, Brownback, and Huckabee on the issue of illegal immigration. Former governor Mike Huckabee stated that Tancredo's ad claiming Huckabee held a pro-amnesty position was "blatantly dishonest", and that Tancredo's campaign either did sloppy research or deliberately mischaracterized his position.[19] Tancredo has used strong opposition to Illegal immigration as a central position of his campaign in Iowa, officially calling it “The Army Against Amnesty.”[20] He stated in a speech during the Iowa Straw Poll, "This is our culture, Fight for it! This is our nation. Take it back." [21]

Most candidates offered free straw poll tickets to supporters, with exception of Duncan Hunter. The Tancredo, Romney and Brownback campaigns used numerous buses to get supporters to the straw poll but[22] former Arkansas Governor Mike Huckabee's campaign provided no transportation.

After an hour of delay due to a voting machine malfunction, which led to the recount of over 1,500 ballots,[23] Mitt Romney won the 2007 Ames straw poll, receiving 4516 votes, or 31%. Former conservative governor Mike Huckabee, whose poll numbers had been steadily rising around the nation, finished second with 2587 votes at 18.1%.[24]

Huckabee's second-place finish was somewhat of a surprise to political analysts because of his lack of funds and transportation to the straw poll as well as a late start in Iowa. Huckabee ended up spending the equivalent of $58 for vote, a small fraction of what Romney ($442.87 to $1,000 per a voter) and Brownback ($148.27 for each voter) spent.[25][26]

Mike Huckabee, speaking in this photo at the Iowa Straw Poll, finished in second place with 18.1% of the vote
He said after the victory, “We had two fish and five loaves and it fed 5,000.” Although Romney won the event at great cost, many political analysts believed that Huckabee's strong second-place finish made him the biggest winner at the straw poll.[27]