Apollo 11 carried the first humans to the moon. On July 20, 1969, Neil Armstrong became the first person to set foot on the moon, stepping onto the lunar surface and saying: "That's one small step for a man, one giant leap for mankind." [1] The crew consisted of Commander Neil Armstrong (a veteran U.S. navy aviator who was a civilian at the time of the mission), Edwin "Buzz" Aldrin Jr. (then an active-duty officer in the U.S. Air Force), and Michael Collins (also a U.S. Air Force officer). Aldrin was the second person on the moon. Collins orbited in the command module, Columbia; Armstrong and Aldrin descended to the surface in the lunar excursion module, Eagle. They broadcast their brief visit to the lunar surface live on international television. During their visit they placed the American flag along with a plaque which read: "Here men from the planet Earth first set foot on the moon July 1969, A.D. We came in peace for all mankind." They also gathered rocks and soil during their visit. Aldrin, a Presbyterian elder, administered the Rite of Communion to himself while on the moon, but did not disclose this due to concerns that the act might be protested by secular activists.

The Saturn V rocket carrying Armstrong, Aldrin, and Collins was launched on July 16, 1969 by NASA from Kennedy Space Center in Florida, and it entered lunar orbit on July 19. 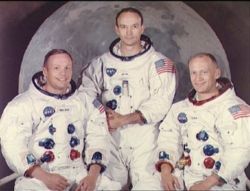 President John F. Kennedy had urged the United States to send a man to the moon before the end of the 1960s. By the time the landing was made, President Richard Nixon was in office. He spoke with the astronauts by radio shortly after they landed.

Some skeptics have claimed that Apollo 11 and the five subsequent lunar landings were hoaxes filmed on television or movie sets. These claims have been debunked by the participants and scientific experts; in one encounter Aldrin punched a conspiracy theorist. Several of the landing sites have since been photographed from orbit by unmanned probes, strongly suggesting that humans did in fact visit the lunar surface.