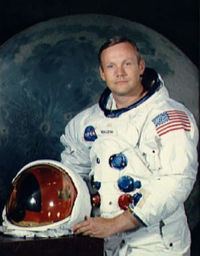 Armstrong was a member of the Boy Scouts of America in his youth, and he earned the highest rank of Eagle Scout before the age of 18. He was a United States Navy pilot for three years, and flew over Korea; he left to become a test pilot in 1952. He became a NASA astronaut and flew on Gemini 8, carrying out the first space-docking with the Agena docking module. He was made mission commander for Apollo 11. The crew, consisting of Neil Armstrong, Buzz Aldrin, and Michael Collins, boarded the Saturn V before sunrise on the 16th of July, 1969 and took off at 9:32 am. On July 20, 1969 at 10:56:15 p.m. EDT, Armstrong became the first man to set foot on the moon.[1]

One Small Step for a man[edit] When Armstrong stepped onto the moon surface, he said the well-known words "That's one small step for a man; one giant leap for mankind." that are even today associated to the moon landing. Due to a transmission glitch, the article "a" was not audible and Armstrong was widely misquoted as saying "one small step for man" (i.e., for mankind) - turning his epigram into a nonsense.

The astronaut was clearly contrasting his own tiny personal action ("a man" stepping off a ladder) with the momentous significance that landing on the moon had for all of mankind, yet journalists generally ignored the discrepancy and repeatedly published the misquote.

These words are an interesting example of the problems historians faced in finding out what really happened in history. His words were broadcast and millions of people heard them. Yet, for a long time, there was disagreement about what he had said.[2]

The broadcast seemingly omitted the "a", reducing Armstrong's quote to the senseless "That's one small step for man; one giant leap for mankind."[3]

However, in 2006, the Australian programmer Peter Shann Ford found the trace of the missing "a" in a downloaded recording he analyzed with audio software and presented his findings at the Smithsonian Institution's Air and Space Museum (Washington, D.C.) and at NASA's Washington headquarters. The conclusion is that the transmission reduced Armstrong's "a" to a 35ms sound bit - 10 times too quickly to be heard by human ears.[4]

On August 25, 2012, Armstrong died of complications following a surgery to repair a blocked coronary artery.[5]