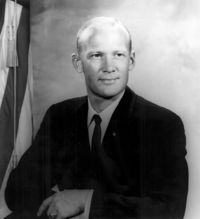 Edwin "Buzz" Aldrin Jr. (born January 20, 1930) was the second man to walk on the moon. Aldrin was born Edwin Eugene Aldrin, Jr., and is a former NASA astronaut, and Colonel USAF (Ret.). Aldrin legally changed his name in 1988 because his childhood nickname was "Buzz" received from by his sister—she mispronounced "brother" as "buzzer", which was shortened to Buzz.

The iconic image from Apollo 11 is of Buzz, taken by Neil Armstrong during their historic moonwalk on July 20, 1969. Only the commander had a camera fixed to his space suit so the vast majority of the first lunar landing photos are of Buzz (or the Lunar Module Pilot).

Aldrin spent 12 days and 1 hour in space. Aldrin received the Presidential Medal for Freedom in 1969, in addition to the Robert J. Collier Trophy, the Robert H. Goddard Memorial Trophy, and the Harmon International Trophy. Aldrin also fought in the Korean War, flying 66 missions and shooting down 2 MiG-15s.

Buzz was not on any Apollo mission other than Apollo 11, but continued to be involved with the space program by promoting space exploration and in 2001 was appointed to the Commission on the Future of the United States Aerospace Industry by President Bush.

Religious observance on the Moon

On July 20, 2009, writer Eric Metaxas revealed that Buzz actually celebrated Holy Communion on the Moon, within a few minutes of the landing and before the famous spacewalk. An elder in his Presbyterian congregation, Buzz sought to mark the unprecedented occasion of the lunar landing in a fitting manner. He asked his church pastor for help, and the pastor obliged by consecrating some Communion elements and furnishing a tiny chalice. These Buzz took with him as part of his personal-items allowance.

Then, shortly after the landing, Buzz made this statement, carried live on radio and television:

Then the two astronauts cut off their radio communication while Buzz conducted his celebration in private, with only his Mission Commander for company. He would have preferred to celebrate the Communion openly, but NASA was then facing a lawsuit by atheist Madalyn Murray O'Hair, over the earlier reading from Genesis by Apollo 8 Command Module Pilot Jim Lovell, and asked him to keep his observance private in order to avoid any more difficulties from that quarter.

Buzz wrote about his celebration in the magazine Guideposts, several months following his return. Many years later, Mr. Metaxas asked Buzz about it, and he confirmed it. The story also appears in Metaxas' book, Everything You Always Wanted to Know About God (But Were Afraid to Ask).[1]

Webster Presbyterian Church, a congregation in Webster, Texas (near the Johnson Space Center) where Aldrin was an elder at the time of his moon landing, commemorates the event on the Sunday nearest to July 20 by holding Communion in its service.[2]