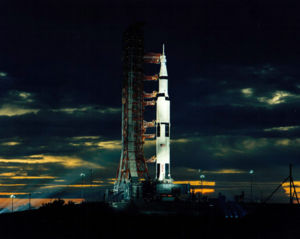 Apollo 17 on the launchpad.

Project Apollo is the pride of American spaceflight. It began when United States President John F. Kennedy proposed that America put a man on the Moon by the end of the 1960s. In 1969 his dream came true with Apollo 11 when Neil Armstrong became the first man to walk on the moon. However, this success was not without costs. Less than a year later, the aborted mission Apollo 13 almost resulted in the death of the crewmembers. Only extraordinary measures by the flight team on the ground and in the spacecraft prevented it from becoming a tragedy. But tragedy was not fully avoided; three astronauts, Virgil "Gus" Grissom, Ed White, and Roger Chaffee, had been killed three years earlier in a fire on Apollo 1 while the rocket was on the launch pad.

Beginning with Apollo 15, a small electric car was used to transport the astronauts across the surface of the moon. A total of twelve men walked on the moon, but after Apollo 17 in 1972, the program came to an end. The Saturn 5 booster constructed for Apollo 18 carried Skylab, America's first space station, into orbit.

There has been speculation that began with Rocketdyne technical writer Bill Kaysing that the Apollo moon landing missions never actually took place, that it was a hoax filmed in a Hollywood studio. Supporting this interpretation is the fact that the American flag placed on the Moon should not wave, though it appears it does. Also, no stars appear in the lunar sky in photographs supposedly taken on the Moon, as they would be expected to do. Moreover, the shadows in the photographs run in different directions, rather than parallel, as if the sun were not the source of light.[1]

NASA denies this, claiming that it can be conclusively demonstrated scientifically that the astronauts really went to the moon, for example, by analyzing the ages and composition of the rocks brought back by the astronauts.[2]

Further more this would require the cooperation of thousands of individuals involved, something highly unlikely due to the potential marketing opportunity for any person who does come forward.