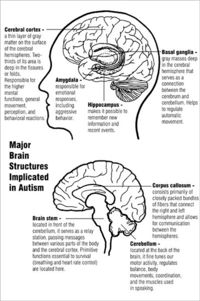 Autism is a type of pervasive developmental disorder. It is characterized by difficulties with social interaction; difficulties with verbal communication, especially pragmatic language; difficulty processing nonverbal communication such as facial expression; intense, narrow interests; difficulty adjusting to changes in routine; and repetitive behaviors. Other signs include lack of eye contact, delayed or unusual play skills, hypo- or hyper-sensitivity to sensory stimuli, and anxiety.[1]

In 2011, the University of Boston published a study on the correlation between atheism and high-functioning/mild autism.[2][3]

On September 19, 2011, the Discover Magazine website had an article indicating that there were empirical results showing a positive correlation between atheism and autism and the article declared:

The autism-spectrum quotient is a questionnaire published by Simon Baron-Cohen and his coworkers at the Autism Research Centre in Cambridge, UK. The questionnaire consists of fifty questions and aims to determine whether adults of average intelligence have symptoms of autism or one of the other autism spectrum conditions.[5]

On May 30, 2012, Matthew Hutson wrote at Psychology Today website that the findings of the study at Boston University entitled Religious Belief Systems of Persons with High Functioning Autism have been replicated by other studies.[6]

LiveScience.com on atheism and autism Individuals with autism have a tendency to use different portions of the brain (yellow) for a movement task compared to a control group (blue).

There is a link between a person's genetics and autism.[9]

Left-handedness is a good indicator of a high mutational load.[10] People who are left-handed higher incidences of autism and schizophrenia.[11] A study found that atheists are more likely to be left-handed (see: Atheists and genetic mutations).[12][13] Vox Day on atheism and autism

PZ Myers' antitheist blog audience and the issue of narcissism vs. Asperger's Syndrome PZ Myers is a New Atheist and New Atheism is a contemporary form of antitheism.[21][22] Therefore, it is very probable his blog appeals to people who hold to a antitheism perspective. Social science research indicates that antitheists score the highest among atheists when it comes to personality traits such as narcissism, dogmatism, and anger.[23] Furthermore, they scored lowest when it comes to agreeableness and positive relations with others.[24]

In the United States, a University of Tennessee study estimated that 15% of American atheists were antitheists.[25]

The atheist biologist Massimo Pigliucci said of Myers and his blog audience, "one cannot conclude this parade without mentioning P.Z. Myers, who has risen to fame because of a blog where the level of nastiness (both by the host and by his readers) is rarely matched anywhere else on the Internet...".[26] In April 2015, Atheist Ireland announced, "Atheist Ireland is publicly dissociating itself from the hurtful and dehumanising, hateful and violent, unjust and defamatory rhetoric of the atheist blogger PZ Myers."[27]

See also: PZ Myers' Inappropriate commentary on the suicide of comedian Robin Williams and PZ Myers' rejoicing at the accidental death of a Brazilian priest and then fantasizing about killing priests

In the United States, reports of autism cases per 1,000 children grew dramatically from 1996 to 2007. It is unknown how much, if any, of that growth came from changes in autism's actual prevalence.[28]

The journalist Dr. Sam Vaknin argues: "Asperger's Disorder is often misdiagnosed as Narcissistic Personality Disorder (NPD), though evident as early as age 3 (while pathological narcissism cannot be safely diagnosed prior to early adolescence)."[31]

In 2012, the Pew Research Forum reported regarding American atheists: "And about 38% of atheists and agnostics have an annual family income of at least $75,000, compared with 29% of the general public."[32]

Families with higher socioeconomic status have access to higher quality health care. Thus, the children of atheists are more apt to be able to be diagnosed with autism if they have the disorder.[33] See also: Atheism and children

See: Causes of autism related to factors which exist in secular societies in the developed world

Autism and some data from secular Europe, atheistic China and religious countries

See: Autism and some data from secular Europe, atheistic China and religious countries

The abstract for the journal article Rethinking Autism, Theism, and Atheism: Bodiless Agents and Imaginary Realities published in the journal Archive for the Psychology of Religion by Ingela Visuri indicates:

For the full journal article, see: Rethinking Autism, Theism, and Atheism: Bodiless Agents and Imaginary Realities, Archive for the Psychology of Religion by Ingela Visuri

Atheism and autism correlations: Accusations of press insensitivity in Turkey

The notion that autism causes atheism has not been proved and criticisms of press insensitivity towards the issue have been leveled in Turkey.[35]