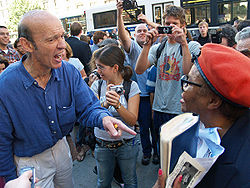 An angry atheist speaking to a woman with a Bible in her hand. The Christian philosopher James S. Spiegel says that the path from Christianity to atheism among several of his friends involved moral slippage such as resentment or unforgiveness.[1] See also: Atheism and anger and Atheism and love

James S. Spiegal and unforgiveness as a cause of atheism[edit]

Blair Scott about atheist infighting with the atheist movement[edit]

David Silverman is the president of the American Atheists organization.

John Lennox on atheism having no basis for forgiveness[edit]

Communist literature and the rarity of mentioning of forgiveness[edit]

Atheism was a part of communist ideology (See: Atheism and communism).

Joseph Stalin, the Premier of the Soviet Union from 6 May 1941 to 5 March 1953, patronised the League of Militant Atheists, whose chief aim, under the leadership of Yemelyan Yaroslavsky, was to propagate militant atheism and eradicate religion.[12][13]

Nikolay Ivanovich Bukharin was a Bolshevik, Marxist theoretician and economist. He was also a prominent leader of the Communist International (Comintern).

According to Encyclopedia Britannica:

His last letter to the communist leader Joseph Stalin said, "My conscience is clear before you now, Koba. I ask you one final time for your forgiveness (only in your heart, not otherwise). For that reason I embrace you in my mind."

Bukharin wrote 34 letters to Stalin and not one was answered. Nikolai Bukharin was executed on March 15, 1938.[15]

It is estimated that in the past 100 years, governments under the banner of atheistic communism have caused the death of somewhere between 40,472,000 and 259,432,000 human lives.[16] Dr. R. J. Rummel, professor emeritus of political science at the University of Hawaii, is the scholar who first coined the term democide (death by government). Dr. R. J. Rummel's mid estimate regarding the loss of life due to communism is that communism caused the death of approximately 110,286,000 people between 1917 and 1987.[17]

Forgiveness frequently involves having empathy and seeing things from another persons perspective. In addition, getting along with others often requires having tolerance and open-mindedness.

See also: Elevatorgate and Atheism and women and Atheist factions

Elevatorgate is a term commonly used to describe a controversy involving New Atheist Richard Dawkins' 2011 comments made to atheist Rebecca Watson which are perceived to have been inappropriate by a sizable portion of the atheist community and to the public at large.[18] Watson is a feminist.[19]

Mindy at Skepchick wrote about Richard Dawkins during the Elevatorgate controversy: "I look forward to watching your legacy crash and burn.. You don't get a second chance."[20][21]

An article by Sarah posted at Skepchick about a conversation between Richard Dawkins and David Silverman, the president of the American Atheists organization, which took place during the planning phrase of the Reason Rally:

"One could call this a postnatal abortion on the part of a mother, I guess; I repudiate him entirely and completely for now and all times. ...He is beyond human forgiveness." - Madalyn Murray O'Hair on her son William's rejection of atheism, conversion to Christianity and calling as an evangelist.[23]

"But more and more I am enamoured of one element of Christianity that I consider its most striking, and most laudable, feature: forgiveness." - Militant atheist Ben Pobjie[25]