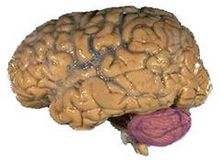 Psychology is a social science. According to Livescience.com, 31 percent of American social scientist believe in God.[1]

From a materialist perspective, the most fundamental paradigm in psychology is the assumption that the human mind is a manifestation of the brain. This idea is in opposition to the traditional (religious) belief in the soul and hence psychology is rejected by many religions and cults, including some evangelical Christian denominations and also Scientology.

Unlike fields such as physics or biology that attempt to work towards a uniting frame or theory for all hypothesis generated, psychology has traditionally focused on defining different schools of thought with substantially different unifying principles and little effort is made to unite these different schools.

Most meta-analysis of the field divides psychologist into 5 different paradigms:

History of atheism and psychology Sigmund Freud in his study

Sigmund Freud was a proponent of atheism who argued that theism was detrimental to mental health.[3] Oxford Professor Alister McGrath, author of the book The Twilight of Atheism, stated the following regarding Freud:

Freud remains popular among postmodern literary academics, who use his anti-Christian pseudoscience as a basis for their own anti-Christianity and moral relativism, even though his theories were disproved decades ago.

Sigmund Freud and his psychodynamics had an enormous influence on psychology which continues to this day, e.g., the concept of an unconscious mind being able to change and direct behavior.

The atheist Ivan Pavlov's work on classical conditioning was pivotal. It became combined with the concepts developed in functionalism and the field of behavioral psychology was born (see B.F. Skinner), and it was hoped that psychology could became a hard science like physics with mathematical rigor.

The atheist B.F. Skinner also thought that all of human behavior was a function of conditioning and instrumental learning.

During the 1960s several developments altered the course of psychological research. Several experiments had begin turning up anomalous results. One of the most famous is the Garcia effect where an animal that is exposed to a novel food and then made sick instantly learns to no longer desire that food.

The atheist Noam Chomsky showed that language acquisition follows seemingly innate rules. Thus cognitive psychology was born as a reaction against behaviorism. Cognitive psychologist attempted to understand the "black box" of the mind through computational analysis, modeling and rigorous experimentation. Psychology has continued to divorce itself from the strict empiricism of behaviouralism through the general endorsement of neuropsychological research. Neuropsychological research, typically conducted with fMRI scans, is not without controversy with prominent psychologists claiming that the interpretation of the data far outstrips its explanatory power. A similar complaint is often levelled against evolutionary psychology by prominent biologists who note that most evolutionary interpretations of psychological phenomena are necessarily post hoc and consequently untestable. It seems noteworthy that as psychology continues to grow and mature as a discipline it becomes increasingly mired in controversy.