The B-29 Superfortress was a long-range heavy bomber first placed into service in World War II in the Pacific theater of that war. The most famous missions that this aircraft ever performed were the dropping of the two atomic bombs on Hiroshima and Nagasaki, Japan. After the war, the B-29 was the first bomber used by the Strategic Air Command.

Four aircraft builders submitted proposals to the army. Boeing, with its Model 345, won the contest.[1][4]

Model 345 boasted many features that Boeing had had under development since 1934, among them:

Two XB-29s were built, and the first of these was delivered on September 21, 1942. Fourteen YB-29 service-test planes were delivered beginning in 1943. Finally, in April 1944, the first 130 operational B-29s began to arrive in India for the Twentieth Air Force.

The B-29 represented the highest achievement of traditional (pre-jet) aeronautics. Its four 2,200 horsepower Wright R-3350 supercharged engines could carry six tons of bombs 3,500 miles at 33,000 feet (high above Japanese flak or fighters). Computerized fire-control mechanisms made its 12 50-cal. machine guns (and one 20mm cannon) lethal against fighters. It carried a crew of 10, and weighed 140,000 pounds loaded.

Boeing itself built 2766 B-29s at its plants in Wichita, Kansas, and Renton, Washington. In addition, Bell Aircraft built 668 planesand the Glenn L. Martin Company built 536.[4] The total cost of the program was $3 billion US.[5] Since 1941 American strategy against Japan was built around heavy raids against the flimsy, easily burned cities. Plans to base B-17 bombers in the Philippines failed when Japan attacked the airbases and overran the islands. The B-29 had the range to give the Americans the weapon they needed to reach Japan. The B-29 was first deployed from bases in India and China in summer and fall 1944. The result was failure—it was extremely expensive to supply the planes (all the gasoline and bombs had to be flown in over "the Hump," the very high Himalayan mountains), and anyway the Japanese Army overran the American bases in China. The Mariana Islands, captured in June 1944, provided a much better airbase within range of all Japanese industrial centers. However, the systematic raids that began in late 1944 were also unsatisfactory, because the AAF had learned too much in Europe; it overemphasized self-defense. AAF commander General Hap Arnold, in personal charge of the campaign (bypassing the theater commanders) brought in a new leader, brilliant, indefatigable, hard-charging General Curtis LeMay.

At first the B-29 groups tried to duplicate the results of daylight precision bombing that had been used in Europe. The results were poor.

In early 1945, General Curtis LeMay ordered a radical change in tactics: remove the heavy fire control gear and machine guns (and gunners), and fly at low altitudes at night. (Much fuel was used to get to 30,000 feet; it could now be replaced with more bombs.) It was a fearsome gamble, but it paid off in increased bombing accuracy and lower casualties in men and aircraft.[6]

In March 1945, General LeMay changed the orders again. From then on, the B-29s flew low-altitude (5,000 feet) night strikes with incendiary bombs.[1][2] LeMay reasoned that because the Japanese economy depended largely on cottage industries spread out over a large number of cities (and because many of the buildings in Japanese cities were still built of wood), massive incendiary bombing would be more effective than precision high-explosive bombing. The results were devastating against Japanese industry and infrastructure.[1][2] By April 1945, the Japanese could no longer build engines for their aircraft. The incendiary campaign continued into August 1945.[2][3][6]

The Japanese radar, fighter, and anti-aircraft systems were so ineffective that they could not hit the bombers. The B-29s carried incendiary bombs. To counter them the Japanese built firebreaks and installed shelters, but not nearly enough. Fires raged through the 50 largest cities, and millions of civilians fled to the small towns and villages (which were not bombed).

Tokyo was hit repeatedly. LeMay sent 325 B-29s over Tokyo on March 9–10 to drop 1665 tons of incendiaries. An unstoppable fire storm burned out 16 square miles and killed over 80,000, most of whom suffocated in bomb shelters when the firestorm consumed the oxygen. One fourth of the buildings in the entire city were destroyed.[7] Half the city's 7.4 million people fled to the countryside (which was not bombed). The raid marked a turning point in the American strategic air war against Japan. Previously, most raids were "precision" raids that used high explosives against industrial targets; thereafter, most raids were "area" raids that used incendiary bombs to burn Japanese cities and kill civilians.

LeMay's strategic shift did not depart radically from the air war in Europe or from prewar planning. The Pentagon had always intended for LeMay to lead the air campaign against Japan and had always viewed incendiary raids against cities and American policy since the 1930s had focused on the burning of Tokyon—and the killing of civilian war workers—as a way to destroy an enemy's industrial capability.[8]

Although damage to big factories was slight, approximately one-fourth of some 4,000 lesser factories, which operated hand-in-hand with the big factories, were completely destroyed by fire.... Moreover, owing to the rising fear of air attacks, workers in general were reluctant to work in the factories, and the attendance fluctuated as much as 50%.

Japanese munitions output plummeted, and by July, 1945, Japan no longer had an industrial base. The problem was that it still had an Army, which was not based in the cities, and was largely undamaged by the raids. The Army was short of food and gasoline, but, as the battles of Iwo Jima and Okinawa proved, was capable of ferocious resistance.

Late in 1944, the AAF ordered a special batch of fifteen modified B-29s, called "Silverplate" models. These planes had no gun turrets except for the tail turret, no armor plate, and new Curtiss electric propellers. These planes were specifically designed to carry one of the two atomic bombs from the Manhattan Project: either Little Boy or Fat Man.[1]

The 509th Composite Group, Colonel Paul Tibbetts commanding, took possession of these aircraft for the atomic attacks on Hiroshima and Nagasaki. Ten of these aircraft are known to have taken part in what became Special Missions 13 and 16 against Hiroshima and Nagasaki, respectively. The most famous of these, of course, was Enola Gay,[4] which dropped Little Boy on Hiroshima, and Bockscar,[4] which dropped Fat Man on Nagasaki.[1][3] (The other aircraft performed weather reconnaissance, blast measurement, and strike photography duties in connection with these missions.)[9]

The destruction of Hiroshima took place on August 6, 1945. The Japanese did not respond to this, perhaps because the Japanese high command did not fully appreciate the magnitude of a disaster that had virtually cut off all communications from one of Japan's largest cities. Then on August 9, 1945, came the destruction of Nagasaki. On that day the Soviet Union formally declared war on Japan and launched an invasion of Japanese-occupied Manchuria in China. The Emperor of Japan then instructed his government to surrender unconditionally.[2][5][6]

In 1946, the Strategic Air Command acquired many of the B-29s still in service. However, these planes were largely antiquated and had seen heavy use during the war. Boeing responded to SAC's need, first with the B-29D, a much-improved model that the new Air Force redesignated as the B-50. This aircraft had 59 percent more power than the original B-29, along with better aerodynamic surfaces, larger flaps, faster-retracting landing gear, and improved hydraulic control systems. It also sported a higher tail that could fold during storage, and a stronger, lighter wing. It also had twelve guns (the original B-29 had ten) and required a crew of twelve. In all, Boeing built 371 B-50s, including 79 B-50As.[10]

B-29 and B-50 squadrons saw intensive action during the Korean War, this time against jet fighter/interceptors using electronic weaponry.[4] Losses were correspondingly much heavier (Five bombers downed in the month of October 1951 alone.[11]). The last B-50s (actually KB-50D tankers) were retired from active service in 1965.[3][10]

The B-29 has been involved in two Broken Arrows, or nuclear weapons accidents. The first occurred on April 11, 1950 when a B-29 departed Kirtland Air Force Base, New Mexico and hit Manzano mountain several minutes later. The crew of 13 was killed and the Mark 4 bomb was demolished on impact. On August 5, 1950, a B-29 departed Fairfield-Suison AFB, California and crashed while attempting an emergency landing. The aircraft burned, and after 15 minutes the Mark 4 bomb's high explosive detonated, killing 19 firefighters, crewmembers, and rescue personnel.[14] 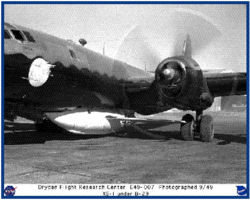 A specially modified B-29 served as the launch aircraft for the X-1, the plane in which then-Captain Charles Yeager achieved the first supersonic flight.[3]

Very few B-29s survive today, primarily because the Air Force was late in declaring the B-29 to be war surplus.[2] The researchers at AcePilots.com have identified sixteen B-29s that they know have survived and remain on display today.

In July 1948, a B-29A, on a climate research mission, crashed into Lake Mead, California. All five aboard the plane got out safely. The plane sank to the bottom of the lake, where it lay for 53 years until divers were able to spot it again.[13]

On May 21, 1995, efforts to recover a B-29 that had landed on a frozen lake in Greenland were abandoned after the aircraft caught fire and burned.[2]

Late in 1944, three B-29s made emergency landings in Vladivostok, USSR. The Soviets detained the crews, then quietly allowed them to escape—but not with their aircraft. Then in 1947, the Soviets demonstrated their newest bomber: the Tu-4, an exact replica of the B-29. With this aircraft, the US-Soviet arms race might be said to have begun.[2][3]

The B-29 in Popular Culture