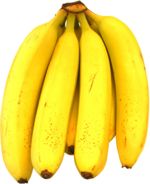 A cluster of Cavendish bananas

A banana is a herbaceous cultagenic plant of the genus musa. Bananas are a tropical fruit from the kingdom Plantae, the division Magnoliophyta, the class Liliopsida, and the order zingiberales

The banana was first found in Malaysia, and by way of curious travelers made it to India, China and Africa. By 1402 Portuguese sailors discovered the tropical fruit in their travels to the African continent and populated the Canary Islands with their first banana plantations. The bananas that were growing in Africa as well as Southeast Asia were not the eight-to-twelve-inch giants that have become familiar in the U.S. supermarkets today. They were small, about as long as a man's finger. It was almost three hundred and fifty years later that Americans tasted the first bananas to arrive in their country. Wrapped in tin foil, bananas were sold for 10 cents each at a celebration held in Pennsylvania in 1876 to commemorate the hundredth anniversary of the Declaration of Independence.