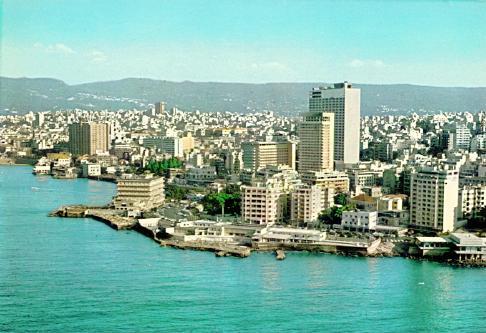 Beirut is the capital of Lebanon. Its inhabitants refer to it as "the city that will not die," as it has been under near constant conflict for two decades, although with major damage.

Beirut stands on the site of a very ancient settlement dating back 5000 years. Its name appeared in cuneiform inscriptions as early as the 14th century B.C. In the first century B.C., Berytus, as it was then called, became a Roman colony and under Roman rule was the seat of a famous law school which remained active into the Byzantine era.

The power and the glory of Berytus were destroyed by a triple catastrophe of an earthquake, a tidal wave, and a fire in 515 A.D. In the following century Arab Muslim forces took the city and in 1011 it fell into the Crusaders. Beirut remained in Crusader hands until 1291 when it was conquered by the Mamlukes. Ottoman rule began in 1516, continuing for 400 years until the defeat of the Turks in World War I. In 1943 Lebanon gained its independence.

Downtown Beirut, the neighborhood most devastated during the war, has been almost restored.