Branson is a small town in the Ozark mountains in southwest Missouri, famous as a major tourism center featuring clean entertainment with a Christian and patriotic tone. The full-time population of 7,500 in the town, and 70,000 in the two-county area, operates over 40 live theaters, 400 restaurants with 35,000 seats, and 200 motels with 18,000 rooms. Branson had limited access until 1903, when the Missouri Pacific Railroad laid tracks there. The town was an original center of the lumber industry, which faded after 1930. Paved highways were built in the 1920s, making Branson a jumping off point for city folk who made recreational trips to the Ozark Mountains, lakes, and fishing spots. Entrepreneur Jim Owen opened the Hillbilly Theater in 1934, which demonstrated demand for live entertainment with an Ozark theme. Chicago businessman Hugo Hischend opened a cave attraction in the 1950s. After his death his family, inspired by Disneyland, opened the Silver Dollar City theme park in 1960 that replicates an old mountain village. Besides numerous rides, it continues to feature a chapel, regular church services and a saloon that serves only soft drinks. Presleys' Country Jubilee opened the still-operating theater in 1967 on the Highway 76 "Strip." Now in their fourth generations, the Presleys performed some five times weekly as the theater. 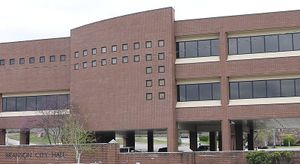 Starting with Roy Clark's Celebrity Theater in 1983, country music became dominant in Branson. Country musicians rushed to Branson, seeing the opportunity to set up their own theater. Johnny Cash, Louise Mandrell, Glen Campbell, Kenny Rogers and many others came, often looking for a second chance after their earlier stardom had peaked. As more performers arrived, more tourists came and attended the other shows as well. By the early 1990s Branson was the world's country music performance capital, second to Nashville, Tennessee.

The area remains a major outdoor recreation center. Thousands of urban residents have summer cabins in the area, and retirement homes are growing. Factory outlet stores have grown. A major new airport opened in the spring 2009, as Branson became more accessible to distant visitors.

By 1998 more than six million visitors came annually, and in 2005 over 8 million; despite its small size it ranks 16th among all overnight leisure destinations in the United States. Tourists spend about $1.5 billion a year, and growth continues apace. The town attracts regional conferences and conventions, and is a favorite for church groups. A geographical profile of Branson visitors shows: 11% come from a radius of 100 miles; 22% from 101–300 miles; and 67% from 301+ miles. The top three motivations for coming are entertainment and shows, theme parks, and shopping. The average family income of the visitor is $55,186; the average age is 57, indicating a strong appeal to an older audience. Although there are activities available for children, it is not Disneyland.

Branson host 45 music theaters with seating for 75 to 4,000 people. The town's 56,000 theater seats compares to the 45,000 seats on Broadway. The variety of musical offerings includes country, pop, gospel, bluegrass, western, rock n roll, classical jazz and Broadway. Vaudeville is represented by comedy, magic and variety shows. Each theater hosts from one to three different shows daily. Collectively, they host more than 80 shows and offer live entertainment from early morning until late evening. Growth continues apace. Branson Landing opened in 2006, an enormous new downtown lakefront development. The mixed-use complex features a multi-purpose convention center with adjoining 300-room hotel and an 80-acre retail shopping and restaurant district – all located on scenic Lake Taneycomo. It stretches the envelope by including shops such as Ann Taylor and Victoria's Secret, a handful of bars, and luxury condominiums.

As a country music center, Branson evolved through three stages of development: use of local talent, introduction of nationally recognized veteran performers, and an infusion of a younger generation of stars. For the country music artist, Branson provides a music setting historically associated with traditional country music, an opportunity to perform on a regular basis in a permanent location, cultural and physical landscapes ideally suited for establishment of residence, and investment possibilities. For the country music fan, Branson's advantages over Nashville, Tennessee, include low-cost, family entertainment clustered in one area, multiple theaters with greater seating capacities, and additional tourist-oriented amenities.[1]

Branson has remained ethnically and religiously homogeneous and has used its image as a simple and safe country town with strong family values to attract increasing number of tourists. There is little liquor and no casinos, prostitution, or off-color venues. The Osmonds, Yakov Smirnoff, Tony Orlando and Andy Williams have all drawn enormous crowds in Branson. Wayne Newton, Merle Haggard and Willie Nelson all flopped. Native Texan Clay Cooper performs up to five times per week at his own theater in Branson.

The Baldknobbers in Branson, circa early 1960s

The mountain roots offer the promise and possibility of relating to the unhurried, happy-go-lucky lifestyle of the hillbilly.[2] It is a way of life far removed from the complexities of the outside world. Branson celebrates them as "baldknobbers," with suggestions of the old popular image of barefoot, lanky country "hicks" standing beside ramshackle outhouses, wearing overalls, sporting toothy-grins, and clutching corncob pipes and jugs of moonshine.[3]

Branson entrepreneurs wove Christian sentiment into a fabric of nostalgia, romantic traditionalism, and whitewashed rusticity that downplays the extreme hardships of mountain life and plays up 21st century family values.[4]

Branson is the setting for The Shepherd of the Hills (1907), a novel by Harold Bell Wright that depicted the folklore of the Ozarks in romantic fashion. A dramatic version has been a major highlight for visitors since 1960.