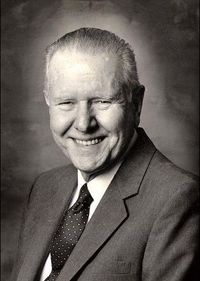 Charles deGravelles in undated photo; he died in 2008 at the age of 95.

Mary Virginia Wheadon deGravelles obituary picture; she died in 2017 at the age of 101.

Charles Camille "Charlie" deGravelles, Jr. (June 24, 1913 – August 28, 2008), and Virginia Wheadon deGravelles (December 4, 1915 – August 31, 2017)[1] of Lafayette, Louisiana, held major leadership positions in their state's Republican Party from 1968 to 1972 and 1964 to 1968, respectively. DeGravelles was the party chairman, and Mrs. de Gravelles was the national committeewoman. When deGravelles assumed the chairmanship, the Louisiana GOP had only 28,427 registered members, barely 2 percent of the state's voters. For a brief time in 1968, both deGravelleses were on the Republican National Committee, a husband-wife combination that has not since repeated itself.

DeGravelles (pronounced DE GRA VELLES) was born to Dr. and Mrs. Charles Camille deGravelles, Sr., in Morgan City, located in both St. Martin and St. Mary parishes in south Louisiana. He graduated in 1930 from Thibodaux High School in Thibodaux in Lafourche Parish. His father practiced in several cities and was the last physician in New Iberia to make house calls. DeGravelles graduated from Thibodaux High School in 1929.

Virginia Wheadon was born in Alexandria in Rapides Parish in central Louisiana, to John Samuel Butler Wheadon and the former Anna Kilpatrick. Her father owned the former Rapides Hotel on Second Street. The building was torn down about 1960. Mrs. Wheadon was a homemaker and a legal secretary. Virginia lived next door for a time to the family of Nauman Steele Scott, I. Nauman Scott, II, with whom she recalls having ridden tricycles together, went on to become a U. S. district judge in the Western District of Louisiana, based in Alexandria. (Scott died in 2001.) Virginia's grandfather was a sheriff, and her great-grandfather was a judge. Virginia graduated from Bolton High School in Alexandria in 1931 and attended for two years Louisiana normal school in Natchitoches, now Northwestern State University. Thereafter, she transferred to Louisiana State University in Baton Rouge, from which she received her degree in education and met Charles.

Charles and Virginia married on September 14, 1935. They eloped and were wed by a justice of the peace in Woodville in Wilkinson County, Mississippi. DeGravelles noted in July 2006 that he had been "happily married for seventy-one years." Their elopement came at the time that the legendary Huey Pierce Long, Jr., lay dying in a Baton Rouge hospital from the hands of an apparent assassin.

The deGravelleses had five children, twin sons (born 1949) and three daughters, one, Alix deGravelles, deceased. The sons are Charles Nations deGravelles, an Episcopal archdeacon, and John W. de Gravelles, an attorney, both of Baton Rouge. The daughters are Claire Cloninger, a writer of books and contemporary Christian music in Fairhope, Alabama, in Baldwin County near Mobile, and Ann McBride Norton of Bali, Indonesia. Son-in-law Ed Norton works for the Nature Conservancy in environmental projects, and daughter Ann is a photographer with her own company, Photo Voice. The Nortons often visited former Ambassador Grover Rees, III, and his wife when Rees was stationed in East Timor. The de Gravelles children grew up with Rees, now a lawyer in Lafayette, and Rees' siblings.

DeGravelles received his degree from LSU and completed all but one course in law school. He was not admitted to the bar. Instead, he was hired in 1937, during the Great Depression, when a recession had returned within the overall depression, by Standolin Oil and Gas Company (later Amoco) in Lake Charles. He was dispatched to the Anse la Butte area to buy leases for the company. His position was referred to as that of a landman. He knew some French and had a French last name but was not Catholic; yet the company believed that he could connect well with the local people at Anse la Butte. In 1940, deGravelles moved permanently to Lafayette. He remained with the same company until his official retirement in 1999. He "retired" but was called back by the company for several years thereafter.

Over the years, deGravelles watched Lafayette grow rapidly because of the expansion of the oil industry. He lauded Amoco as an employer and said that he fully enjoyed his time in the oil field.

The deGravelleses became active in local and state politics. In 1941, he and Mrs. deGravelles became the first two whites in many years to register as Republican voters in Lafayette Parish.[1] The only registered Republicans then were a few blacks, who were then frozen out of the pivotal Democratic primaries. Mrs. deGravelles recalls that she, as a 24-year-old housewife, campaigned for Wendell Willkie over Democrat Franklin D. Roosevelt, who swept Louisiana, the South, and the nation. Another Republican,David Pipes, unsuccessfully sought the Acadiana-based 3rd Congressional District seat in that same 1940 election. The deGravelleses hence were among the oldest living Republicans in the state of Louisiana.

Charles deGravelles succeeded Charlton Lyons of Shreveport in Caddo Parish in northwestern Louisian as the Louisiana party chairman. Lyons had been the 1964 Republican gubernatorial nominee, having polled a then record-breaking 37.5 percent of the ballots cast, just under 300,000 votes. Mrs. deGravelles recalls Lyons as "a wonderful, compassionate man" who was a true pioneer in the development of a two-party system in Louisiana. DeGravelles and Lyons were pledged to the nomination and election of former Vice President Richard M. Nixon.

In the fall of 1966, de Gravelles contested the Third District seat on the Louisiana State Board of Education. He polled 24,236 votes (35.3 percent) against the Democrat Harvey Peltier, Jr. (1923-1980), who polled 44,413 ballots (64.7 percent). In that same election, Charlton Lyons' younger son, Hall M. Lyons, ran unsuccessfully for Congress against the Democratic incumbent Edwin Edward Willis.

In the contest for the 1968 Republican presidential nomination, a minority in the Louisiana delegation seemed enchanted with a potential unannounced third candidate, then California Governor Ronald Reagan, who had stumped for Lyons in the winter of 1964 by giving stemwinder speeches in Lafayette, Lake Charles, and Baton Rouge. De Gravelles summed up the majority opinon of the Louisiana party when he said, "much as I admire Governor Reagan, I feel that Nixon has a broad appeal and is the best qualified man in either party." DeGravelles, who became chairman in 1968, predicted that Nixon would be vigorously challenged in Louisiana, not by the Democratic nominee, Vice President Hubert Humphrey of Minnesota, but the third-party forces pledged to then former Alabama Governor George Wallace. Most of the Louisiana GOP delegates did favor Reagan as a vice-presidential choice in 1968, a selection that ultimately went to Governor Spiro T. Agnew of Maryland, who was forced to resign in 1973 for tax evasion and bribery.

DeGravelles expressed hope that Louisiana voters might be persuaded to support the Republican ticket despite Wallace's appeal to blue collar voters. Louisiana was one of five states to support Wallace in 1968. The Nixon-Agnew electors drew 257,535 votes (23.5 percent) in Louisiana, to Wallace's 530,300 (48.3 percent) and Humphrey's 309,615 (28.2 percent). Nixon ran 26,55 votes ahead of his 1960 showing in raw popular votes in Louisiana, but his 1968 showing was 5.1 percentage points below the previous standing.

The deGravelleses each attended one national GOP convention: he in 1972 in Miami Beach, Florida; she, in 1964 in San Francisco.

DeGravelles was succeeded as chairman by businessman James H. Boyce of Baton Rouge. Under Boyce's tutelage from 1972-1976, the Louisiana GOP participated in the 49-state sweep for Nixon, having lost the presidential vote in 1972 only in West Feliciana Parish. Moreover, under Boyce the still fledgling party did capture its first two seats in the United States House of Representatives since Reconstruction, with the election in 1972 of subsequent Governor David C. Treen in the 3rd congressional district and William Henson Moore, III, in a January 1975 special election, which was a rerun of the regular November 1974 general election in the Baton Rouge district.

In his later political activities, deGravelles in 1993 tried to recall the late Democratic Mayor Kenneth Francis "Kenny" Bowen from office on grounds that Bowen, a former Republican, was too much of a "micromanager" and too unstable to run the city efficiently and fairly. Though sufficient signatures were obtained to have the recall election, the judge disqualified many of the names, and Bowen completed his third and final term in office.

Charles and Virginia deGravelles have won several joint awards, primarily for their two-party and Republican activities. They have been honored by Freedoms Foundation of Valley Forge, Pennsylvania, and the Louisiana Republican Party for lifetime achievement. Mrs. deGravelles has been cited by the Daughters of the American Revolution, of which she was a 60-year member.

On January 27, 2006, the deGravelleses were inducted into the Louisiana Political Museum and Hall of Fame in Winnfield—the first couple honored together by the organization, which began recognizing Louisiana politicos in 1993. Former Congresswoman Corrine Claiborne "Lindy" Boggs of New Orleans was inducted in 1994, a year after posthumous honors were given to her husband, U. S. Representative Hale Boggs The deGravelleses' rival, Kenny Bowen, who had been a budding Lafayette Republican in the 1960s before he moved to the Democratic camp, was inducted into the Hall of Fame in 2002, shortly before Bowen's death.

Virginia deGravelles died three months and four days shy of her 102nd birthday. Her obituary says that she had "a brilliant mind, a quick sense of humor, and a gentle but determined spirit. She was a wise and loving woman whose counsel was sought by many. She passed on her love for politics, religion, literature, and philosophy to her children and other descendants."[1]

Though Charles and Virginia deGravelles were pioneering Louisiana Republicans, their twin son, John W. deGravelles, is a liberal Democrat who in 2014 was appointed to the United States District Court for the Middle District of Louisiana by U.S. President Barack H. Obama.

On August 31, 2014, Judge deGravelles, who is based in Baton Rouge, partially blocked enforcement of Louisiana's new abortion law which was to have taken effect the following day. The measure required those performing abortions to have admitting privileges at a hospital within thirty miles of the abortion facility. Four physicians challenged the law to seek more time to comply with the requirement for hospital privileges. DeGravelles allowed the four to continue to provide abortions without prosecution pending a permanent injunction. DeGravelles said that the doctors' risk of being fined and losing their licenses to perform abortions outweighed any injury to the state.[2]

In January 2016, Judge deGravelles declared unconstitutional a Louisiana state law which would have required abortion clinics to meet health and safety standards. The law would have required that abortionists have admitting privileges at a local hospital. Facilities which perform more than five abortions would have to maintain proper licensing. Under the law, all abortions would require informed consent. Louisiana Attorney General Jeff Landry appealed deGravelles' decision to the United States Court of Appeals for the Fifth Circuit in New Orleans.[3]