San Francisco refers to both the city and county in California[1] and is generally considered one of the most beautiful cities in the world.[2] It is well known for its excellent public transit systems, including Muni subway and streetcars, BART (Bay Area Rapid Transit) trains to suburbs, and the famous San Francisco cable cars.[3] The city has survived two extremely damaging earthquakes, one in 1906 and another one about 75 miles away in 1989[4][5] known as the Loma Prieta Earthquake. Fear of another earthquake is the reason that no freeway through the city exists. Indeed, it is impossible to access the Golden Gate Bridge without driving on city streets.

Political correctness tends to downplay multiple problems of political origin afflicting San Francisco. Shockingly, a prevalence of human waste litters the streets due to a large homeless population. Housing is unaffordable for most, and a two-tier society more common in socialist countries exists. While Democrats promote public transportation as an alternative to gas-powered vehicles, more homeless ride public transportation 24/7 as an alternative to living outdoors. Crime on public transportation has increased while ridership among the general population has decreased.[6] Random shootings and other crimes as a result of San Francisco being a sanctuary city plague the community, sometimes with perpetrators never caught or, if caught, not convicted.

The downtown area of the city is laid out on two grids, with a 45 degree offset between them. Market Street separates the two grids. Many tourists come to visit the Civic Center, Embarcadero, and Union Square areas, all of which are north of Market. Famous San Francisco landmarks include the Golden Gate Bridge, Fisherman's Wharf, and Alcatraz Island.

San Francisco, with a large homosexual population, is also considered to be one of the most liberal American cities. The city's former democrat mayor, Gavin Newsom ordered the city clerk to issue marriage licenses to same-sex couples despite the practice being explicitly illegal under California law. The marriages were nullified by the courts shortly thereafter, as the mayor and clerk were violating California state law.[8]

In 2001, the city of San Francisco extended its workers health insurance to cover sex-change operations for municipal employees.[9][10] The Board of Supervisors and Mayor approved the measure which extended up to $50,000 in benefits to city workers who want to switch their gender.[11]

San Francisco is also a "sanctuary city", which means they have passed an ordinance that it is against the law to report illegal immigrants to the United States authorities as they are required to legally do. In other words, anyone upholding the federal law will get in trouble with the city. This has led to a culture of underaged drug dealers continuing their trade with impunity.[12]

San Francisco is part of the San Francisco Bay Area, which includes Oakland, San Jose, Berkeley, and other smaller towns like Cupertino, Palo Alto, Mountain View, San Mateo, Saratoga, and Menlo Park. The city is home to several large companies, including Gap, Abercrombie & Fitch, and Cnet. San Francisco has been overtaken in population and economic significance by San Jose and the rest of Silicon Valley. 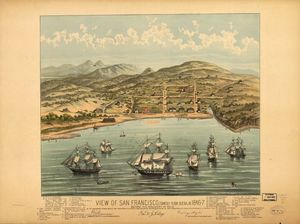 The Yelamu tribe of American Indians lived in the San Francisco peninsula prior to European arrival in the area, with settlements dating to as late as 3000 BC;[13] however, it should be noted that carbon dating is likely flawed.

San Francisco was founded as a mission by Franciscan monks in 1776. Within only a few years, several natives had been converted to Christianity.[14] A census conducted at the time showed a total of 814 people living in and around the mission.[15]

The San Francisco Bay, as well as its central location, and position on the California mission trail played heavily into the growth of the city during the California Gold Rush.

In 1906, a large earthquake struck San Francisco, killing approximately 3000 people and starting a fire which burned about 4.7 square miles of cityscape.[16] The earthquake originated on the San Andreas fault, which continues to threaten major Californian cities. The second largest earthquake to affect San Francisco, the Loma Prieta Earthquake, struck in 1989, causing damage to the city and surrounding areas.

In the first half of the 20th century, business interests in San Francisco, organized into the Chamber of Commerce, asserted themselves as the only legitimate leaders of the community, asserting that labor unions were only a disruptive special interest. However, the voters and the overall political culture of the city were much more sympathetic to the working class and to labor unions as their representatives in civic decision making. After conflict between business and unions, including strikes sometimes requiring federal troops, business finally accepted the legitimacy of labor unions after the bitter strike in 1934. The resulting business-labor partnership aided San Francisco's postwar expansion.[17]

The Golden Gate International Exposition of 1939-40 boosted San Francisco. The exposition's board was dominated by members of the San Francisco Chamber of Commerce who had the support of major area corporations, other western states, and federal agencies. The Exposition departed from the tradition of world fairs in its eclectic organization of exhibits, which included productions, displays, lectures, films, demonstrations, and bazaars. These exhibits reflected a transitional phase in American culture, characterized by the process of fragmentation and recombination. The tensions of American society on the eve of World War II were manifested in exhibitions expressing both desires for peace and simplicity, and fascination with expansion and technology.[18]

Jim Jones was the original founder of the "Rainbow Family" in the late 1950s and early 1960s, a term Jones used to refer to his family.[19][20][21] Jones moved to San Francisco in 1970 and was deeply involved in the city's progressive politics.[22] Jones's Peoples Temple was instrumental in the election of Mayor George Moscone, serving as campaign workers and busing in unregistered people to vote. Jones was rewarded with post of housing commissioner.

It was Kamala Harris's mentor, Willie Brown, who brought Jones in contact with the California Democratic party.[23] From there, Jones become involved with the DNC. Willie Brown supported same-sex marriage as early as 1977. Jones publicly met with vice president candidate Walter Mondale, and spoke at events with other leading Democrats at the San Francisco headquarters after the election in 1976, among them First Lady Rosalynn Carter and California governor Jerry Brown.

Harvey Milk, the first openly gay politician elected in California with Jones help would say: "My name is etched in stone with you."[24] Milk wrote letters in support of Jones to President Jimmy Carter. Both Milk and Jones were homosexual activists. The book When the Wicked Seize a City by Dr. Chuck McIlhenny recounts he and his church were terrorized by homosexual activists in San Francisco.

There is much antipathy between the liberal San Franciscans and Bill O'Reilly, who has made many comments about San Francisco values. For example, the San Francisco Chronicle devoted two-thirds of its front page to a picture of Bill O'Reilly and had an extremely large story about him when he stated that San Francisco should secede from the United States and form its own country.[25]

Mr. O'Reilly has stated the following regarding San Francisco values:

A notable incident involving the issue of San Francisco values was the Hamilton Square Baptist Church Riot and the persecution of Dr. Chuck McIlhenny.

For more on this topic see: Homosexual Public Indecency Tolerated in San Francisco

In San Francisco, there have been notable cases of homosexual public indecency that has been tolerated. Christianity Today states the following regarding Pastor David Innes regarding the Hamilton Square Baptist Church riot:

Pastor Innes then cites a September 30, 1993 letter published in the San Francisco Chronicle from a veteran police officer who was "highly embarrassed" when people asked him why he was not making any arrests in regards to totally naked males engaging in lewd behavior at the San Francisco Folsom Street Fair. The officer stated that "At least a dozen times I had to painstakingly explain that we were to take a position of 'high tolerance' and not to create an incident." [28]

In 1990 and 1991 extreme public lewdness was exhibited at the San Francisco Gay and Lesbian Parades and when police authorities were asked why there were no arrests they offered various excuses such as the primary responsibility was to "reflect community standards and maintain crowd control."[29]

The city at that time had no rule outlawing being naked in public; on Tuesday, November 20, 2012, the San Francisco Board of Supervisors voted on if they would change the law that allowed public nudity.[30] The nudity ban passed 6 votes to 5.[31]

In January 2011, San Francisco held the 7th Annual Walk for Life West Coast, a pro-life rally. Up to 50,000 people took part, a record turnout for the event.[32] The counter-protest "was deafened by the sheer size of Walk for Life".[33]