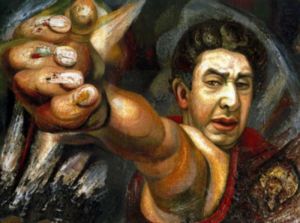 David Alfaro Siqueiros (Ciudad Camargo, Chihuahua, 1896 - Cuernavaca, Morelos, 1974) Mexican Social Realist Muralist. Along with Diego Rivera and José Clemente Orozco (the "Big Three"), Siqueiros was one of the most important artists in the Mexican mural movement. [1] Mexican muralism started during the first decades of the XX century... The murals of Siqueiros are characterized by an imposing strength and an esthetic full of drama and color. [2] Siqueiros was also a lifelong political activist, a Communist, veteran of the Mexican Revolution and Spanish Civil War; because of his political activism he was several times in prison. Issac Deutscher describes him as a man in whom "art, revolution and gangsterism were inseparable."; he was awarded the Lenin Peace Prize in 1967. [3]

Although he is most recognized for his murals inspired by the Mexican Revolution, Siqueiros´s artistic interests were exceptionally varied and included the idea of mechanical motion of futurism, as well as the concept of montage [4]

Siqueiros's radical experiments proved influential for Abstract Expressionist artist Jackson Pollock, in particular, who was a member of his New York Workshop. [5] Zapata, The Metropolitan Museum of Art.