"Each age finds its own technique."[1]

Jackson Pollock (1912-1956) was one of the greatest American painters of the 20th century. He was a leader in the abstract expressionist movement, most notably in "detaching line from color, redefining the categories of drawing and painting, and finding new means to describe pictorial space."[2] He was famous and popularly acclaimed during his life, which was tragically cut short by an auto accident at the age of only 44. He was born in Wyoming and grew up traveling the Southwest, where he may have been influenced a bit by Native American culture. His political views were more populist than Leftist.[3]

He began to study painting in 1929 at the Art Students’ League, New York, under the Regionalist painter Thomas Hart Benton. During the 1930s he worked in the manner of the Regionalists, being influenced also by the Mexican muralist painters (Jose Clemente Orozco, Diego Rivera, David Alfaro Siqueiros) and by certain aspects of Surrealism. From 1938 to 1942 he worked for the Federal Art Project. [1]

Siqueiros's radical experiments proved influential for Abstract Expressionist artist Jackson Pollock, in particular, who was a member of his New York Workshop. [2]

He was among the most prominent of the New York School, more commonly referred to as the Abstract Expressionists. His major innovation was to paint unstretched canvas rolled out on the floor, working from all sides of the picture plane, pouring and throwing paint to create a line that re-encompasses itself over and over again without generating a positive and negative form. His work marked a watershed in American art history.

"Painting is self-discovery. Every good artist paints what he is." 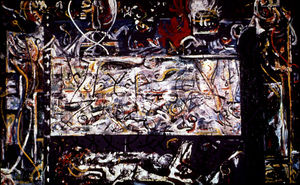