American painting encompasses a wide variety of paintings, including portraits, landscapes and still life, created in America since its colonization.

Colonial Period and The Eighteenth-Nineteenth Century

Painting in American colonial period consisted mainly of portraits. John Smibert, America's first well-trained artist, landed at Newport in 1729. Robert Feke painted the beauty of the aristocratic yearnings of Colonial society. Benjamin West (1738 - 1820) was a Neoclassical painter; West emerged as Europe's foremost history painter, dropping the allegorical trappings from classical antiquity that had been the norm and basing his work on historical research.[2] Benjamin West had an important leadership and influence on later artists; he had a long list of American students that later became famous painters.

Charles Willson Peale was the patriarch of the The Peale Family, the First Family of American art; portrait painter, Charles Willson Peale exerted a major influence on American painting through his own work and that of his sons, brothers and nieces; Rembrandt Peale, his son, was also a remarkable painter; they contributed in a large way to the growth of American artistic interests and institutions.

Gilbert Stuart and John Singleton Copley painted emblematic portraits. Stuart, who studied with Benjamin West in London, revitalized the concept of "Grand Manner" portraiture; his Skater is invigorated with a sense of immediacy and activity. John Trumbull is known as the artist of the American Revolution.

When the Revolutionary War ended in 1783, artists sought to create a distinctive environment for the ideals of liberty. As nineteenth-century Americans sought an appropriate vehicle to express their national zeal, artists turned to images of the land. Ibidem 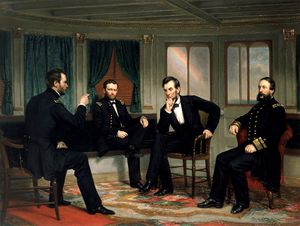 Portraiture was also important but landscapes and folk customs began to express in this period. The first painting school of American art was the Hudson River of landscape painters (The Hudson River School style involved carefully detailed paintings with romantic, almost glowing lighting); Asher Brown Durand (1796-1886) and Thomas Cole (1801-1848) were prominent artists of this School. Frederic Edwin Church (1826 – 1900) was also a landscape painter. He was a central figure in this Hudson River School. Albert Bierstadt was also part of the Hudson River School (not an institution but rather an informal group of like-minded painters). George Caleb Bingham (1811-1879), artist of Missouri and the American Frontier, is best known for his genre scenes. His artworks include portrait, genre, landscape, and history painting but Portraiture was by far George's most prolific artistic genre. His paintings rank among the nation's greatest art treasures.[3] William Morris Hunt (1824 – 1879) a Barbizon School/Tonalist painter trained with Jean-François Millet started the American Barbizon School in Boston.

Harvard's older portrait was painted by Emanuel Leutze (1816-1868), whose most famous work might be Washington Crossing the Delaware (1850); This painting is considered the most famous icon of American history; it has become one of the best known and most extensively published images in American history. [1] [2]

Thomas Moran (1837 – 1926), a member of The Hudson River School, created hundreds of open-air artworks. Moran is considered the premier painter of Yellowstone and the Grand Canyon.

In the late 1880s, Impressionism appeared in America. Theodore Robinson, Mary Cassatt, William Merritt Chase, and Childe Hassam are examples of this School. James Abbott McNeill Whistler worked mainly in Europe; he was a precursor of abstract art.

George Caleb Bingham, Lighter Relieving the Steamboat Aground, 1847, at The White House.