Martin Van Buren (born as Maarten van Buren, 1782-1862) was an American statesman and the 8th President of the United States of America, 1837 to 1841. He was nicknamed "The Little Magician" and "The Red Fox of Kinderhook" to "Old Kinderhook." He was the main founder of the modern Democrat Party and articulated Jacksonian Democracy.

From his base in New York state he collaborated with Andrew Jackson to create the new Democrat Party, and was campaign director for Jackson his victories in 1828 and 1832. Van Buren was elected himself in 1836, but was unable to reverse the Depression of 1837, and was defeated for reelection by a newly invigorated Whig Party under William Henry Harrison. Temporarily opposed to slavery,[2] he was a leader of the anti-slavery Democrats who supported the Wilmot Proviso against the expansion of slavery, and he founded the Free Soil Party, being its presidential nominee in 1848.

Van Buren was born at Kinderhook (Kinderhoek means children's corner in Dutch), a Dutch town in upstate New York. He was the third child of Abraham Van Buren, a farmer, tavern owner and political activist, and Maria Hoes Van Buren, both of Dutch stock. Martin, a native speaker of Dutch, is the only president who spoke English as a second language. He attended local English schools until he left at age 14 to be a clerk and law apprentice in New York City. Admitted to the bar in 1803, he returned to Kinderhook, where he practiced law until 1821 and gained a reputation as a shrewd politician. In 1807 he married Hannah Hoes, by whom he had four sons before her death in 1819. He did not remarry. Van Buren displayed the qualities of a successful politician. He was able, honest, energetic, imaginative and a glad-hander. A small man, standing no more than five and a half feet (168 cm) tall, he was always impeccably dressed, unruffled, and considerate to friend or foe.

From 1800, when he campaigned for Thomas Jefferson, he remained a resolute Republican. A keen judge of the motives of men, he seldom permitted a difference in politics to interfere with personal friendship. Moreover, he was a middle-of-the-road man, always ready to compromise an issue and at all times ready, as he said, to let the people have what they wanted. He rose rapidly in New York politics, first joining the DeWitt Clinton faction in opposing Aaron Burr and then splitting with Clinton and fighting him for control of the state party. The side-changing gave him a reputation as a fox-like ambitious manipulator; that and his red hair made him "the red fox of Kinderhook." In 1812, Van Buren was elected to the state senate, where he organized and led the "Albany Regency," the anti-Clinton faction. Chosen attorney-general of the state in 1816, he was defeated by the Clinton forces in 1819, but was triumphantly elected to the United States Senate two years later.

In the decades after the War of 1812 increasingly competitive political parties became characterized by greater popular participation and organizational sophistication, in what is called the "Second Party System." Silbey (2002) credits Van Buren the major role in this transformation. He introduced a new level of party organization, unswerving loyalty and recruitment of likely young men as campaigners and candidates, Throughout his career, Silbey contends, Van Buren was "the prime organizer, articulator, and manager of the nation's political conflict."

Because Clinton's followers supported Andrew Jackson for the presidency in 1824, Van Buren aligned himself with the William H. Crawford forces and became their acknowledged leader in the congressional caucus that nominated Crawford. Crawford had a stroke and came in third. In the Senate Van Buren supported the tariff bills but opposed internal improvement measures, possibly affected in this stand by the thought of protecting New York's Erie Canal. Increasingly, however, he became a states' rights man devoted to strict construction views. He was reelected to the Senate in 1827, but resigned to become governor of New York, a position he used briefly to advocate the "safety fund system," which required all banks in the state to ensure each other's financial soundness.

By 1828 he had changed his political allegiance to Jackson, becoming his confidential political adviser and in 1828 managing his election campaign in the northeast. Van Buren was rewarded as secretary of state. Internal factionalism beset Jackson's cabinet; Van Buren opposed Vice President John C. Calhoun. Carefully avoiding any conflicts with Jackson's close friends in the "Kitchen Cabinet" (Jackson's informal advisors) he became one of the most reliable supporters of the president. When Peggy Eaton, wife of the secretary of war, was ostracized by senior officials (on rumors she once was a prostitute), Jackson supported Eaton and Van Buren went out of his way to befriend her. He vigorously supporting Jackson in trying to destroy the Second Bank of the United States, over the opposition of the business community. Van Buren helped Jackson by obtaining the New York legislature's official endorsement of Jackson's stern warnings against South Carolina in the Nullification Crisis. By 1831 Jackson made it clear that Van Buren would be his vice-presidential running mate in 1832. Appointed minister to the Court of St. James (i.e. ambassador to Britain) in 1831, Van Buren arrived in London only to find that Calhoun had blocked his confirmation in the Senate. During the next year he made a tour of Europe and returned to the States after he had been nominated for the vice-presidency. He was elected with Jackson, who defeated Whig Party candidate Henry Clay.

Van Buren was infamously known for his exploitation of Irish Catholic immigrants during the 1800s, when during the time Democrats supported mass migration. He had many ties to Tammany Hall, a New York Democrat political machine known for corruption. Van Buren organized city bosses such as Boss Tweed to create a patronage system (an extension of his predecessor Jackson's spoils system) in keeping the immigrant Democrat voters poor and dependent. 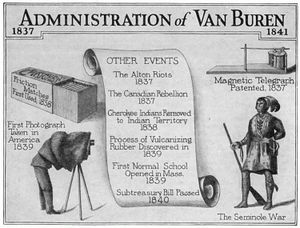 Both as secretary of state and as the presiding officer of the Senate he acquitted himself with skill and honor, and with Jackson squarely supporting him, he was nominated by his party for the presidency in 1836.

Van Buren in office continued his party's opposition to the Bank by proposing a plan for an independent treasury in which the Government could keep its funds. Although there was strong opposition to the plan, a subtreasury bill was passed in 1840. Long before his election, the president had had to commit himself on the slavery issue. He was opposed to the extension of slavery although he had promised to protect it where it existed. Accordingly, he opposed the plan to abolish slavery in the District of Columbia. On the other hand, he refused to support the plan to annex Texas, which would have created more slave territory and would probably have meant a war with Mexico. He also preserved strict neutrality during Canada's small revolt against Britain in 1837, an action that was heartily criticized by the strong anti-British faction in the U.S..

The most difficult challenge was the financial panic of 1837 and the depression that followed. Just as Van Buren took office in March 1837 the nation's banks began to suspend specie (gold) payment. For the next three years unemployment, crop failures, and low prices created real distress throughout the nation. Banks closed their doors, states were unable to meet their financial obligations, and many workingmen in the eastern cities were without jobs and hungry. Since the prevailing economic thought of the period held that the government should abstain from interfering with the country's economic life, Van Buren did nothing to alleviate the effects of the depression.

Against this background of discontent and suffering he was renominated in 1840 to run against the Whig candidate, Harrison. In the campaign that followed, Whigs ridiculed Van Buren as "a Northern man with Southern principles," a cold aristocrat indifferent to the people's sufferings, and nicknamed him "Martin Van Ruin"; he was decisively beaten.

Retiring to Kinderhook, Van Buren in 1841, took up the life of a gentleman farmer. Van Buren took a great interest in his farm, supervising workers and utilizing "progressive" farming techniques. Van Buren embraced the genteel lifestyle but made it his own with his enthusiasm, profit-mindedness, and bourgeois calculation. He was still politically ambitious, and during the next four years worked for the 1844 nomination. His equivocal position on slavery and Texas, made known by the famous "Hammet Letter," hurt his chances considerably. In the following convention, although he had a majority of the delegates, he was unable to obtain the necessary two thirds and lost to James K. Polk, who was elected. In 1848, the Mexican-American War had intensified the slavery issue. Advocates of the Wilmot Proviso tried to block slavery in new territories acquired from Mexico. They joined the "Barnburner" faction of New York Democrats and formed the new Free Soil Party, whose convention in Buffalo drew 465 delegates from 18 states. With Charles Francis Adams as his running mate, the new anti-slavery party stood for the Wilmot Proviso. He won 291,000 votes, half of them in New York. By splitting the Democrats in New York, his new party allowed Whig Zachary Taylor to win. Van Buren split with the Free Soilers when he supported the Compromise of 1850. He grew fearful that the slavery issue would disrupt the Union. Neither an abolitionist nor a slavery man, he supported James Buchanan in 1856 in the hope of compromise. When war broke out he became a sincere supporter of Lincoln. He died at Kinderhook, July 24, 1862.