Charles Gates Dawes (August 27, 1865 – April 23, 1951) was Vice President of the United States from 1925 to 1929. He was Comptroller under President McKinley and won the Nobel Peace Prize in 1925 for stabilizing the German economy with the Dawes Plan (1924). It involved American loans to Germany, which Germany used to pay reparations to Britain and France and other Allies, who in turn paid off their war debts to the U.S. The Plan succeeded in restoring prosperity to Europe. 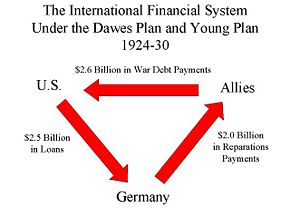 Dawes complained about not being able to do much as Vice President. "I can do only two things," he said to Senator Barkley. "One is to sit up here and listen to you birds [senators] talk, without the privilege of being able to answer you back. The other is to look at the newspapers every morning to see how the president's health is." [1]