Edward Hopper (b. July 22, 1882; d.May 15, 1967) was an American painter and printmaker who depicted images of contemporary American life.

Although he had little interest in the vanguard developments of Fauvism or Cubism, he developed an enduring attachment to the work of Edgar Degas and Edouard Manet, whose compositional devices and depictions of modern urban life would influence him for years to come... In the 1910s, Hopper struggled for recognition. He exhibited his work in a variety of group shows in New York, including the Exhibition of Independent Artists (1910) and the famous Armory Show of 1913, in which he was represented by a painting titled Sailing (1911; Carnegie Museum of Art, Pittsburgh)... In 1933, Hopper received further critical recognition as the subject of a retrospective exhibition held at the Museum of Modern Art. He was by then celebrated for his highly identifiable mature style, in which urban settings, New England landscapes, and interiors are all pervaded by a sense of silence and estrangement... He never lacked popular appeal, and by the time of his death in 1967, Hopper had been reclaimed as a major influence by a new generation of American realist artists. [1] 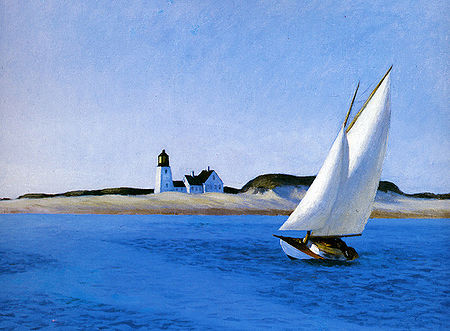 Hopper's compositions often have an air of stillness and a pervading mood of solitude.

That is as true for his evocative images of sailing—a recurring theme in his work—as it is with his stark depictions of urban life. [2]