Sheriff David Clarke (born August 21, 1956) is a conservative veteran of the Milwaukee police department and is a fierce critic of Barack Obama, Eric Holder and the black lives matter movement. He served as the Milwaukee County Sheriff from 2002 to 2017.

Born on August 21, 1956 to Jeri and David Clarke Sr., the future sheriff had grown up with discipline and order, as said by his father, who was a Korean War veteran.[2] Raised and taught to have a respect for authority, Clarke would be sworn in to join the Milwaukee police officer at the age of 21. 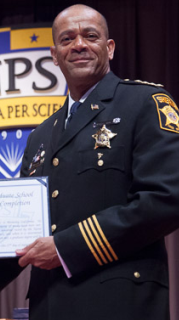 Clarke's public campaign in defense of cops has won over many people who are sick and tired of the unjustified attacks that were against law enforcement and in defense of criminals. In appearances on Fox News and comments on Twitter, he rips the BLM group as "Black Lies Matter," and labeling its members "subhuman creeps" and calling for the movement's eradication "from American society." [3]

While liberal Wikipedia continues to almost entirely focus on Clarke's department scandals in its page's section on his tenure as sheriff,[4] it has been understated and ignored by the media that under his watch as sheriff, crime rates in the city of Milwaukee decreased after rising several times, including a significant drop in violent crime from 2007 to 2011.[5]

Clarke is no stranger to controversial remarks. He called on Milwaukee's inner city residents to take responsibility for their lives and take up arms to defend themselves against criminals.[6]

Liberals strongly dislike Clarke, and they have thrown petty attacks at him, such as a claim that he wears "fake military metals" on his uniform. Even the liberal-leaning Snopes.com showed those claims to be false.[7]

Clarke resigned his position as Milwaukee County Sheriff on August 31, 2017,[8] and he joined a pro-Trump super PAC soon after.[9]

Clarke is a registered member of the Democrat Party, but only because his county is very liberal and so he can win elections. On issues, however, Clarke is even more conservative than many Republicans. He speaks a GOP events, endorses Republicans, frequently criticizes the Democrat Party and leftists, and he is supported by the National Rifle Association.[10][11] He has also criticized congressional Republicans for complacency and not passing conservative legislation.[12]

Sheriff Clarke endorsed businessman Donald Trump for the 2016 U.S. presidential election, and he spoke for Trump at the Republican National Convention in Cleveland, Ohio.[13] He remarked on the presidential race, "To Say That Trump Can't Beat Mrs. Bill Clinton In November Is Ludicrous." [14] Clarke announced in 2017 that President Trump had appointed him to a Department of Homeland Security position, but he later stated he declined the position after delays in assuming office and in order to help the administration in other ways.[15][16]

In accordance with O’Sullivan’s First Law, Foxnews, which is gradually caving into the Left, has been banned Sheriff Clarke from the network for being too traditionally conservative.[17]

When he made an appearance on The Candace Owens Show, Sheriff Clarke has stated a strong faith in God and the importance of forgiveness.[1] In addition, he also emphasized on the importance of critical thinking rather than being indoctrinated.