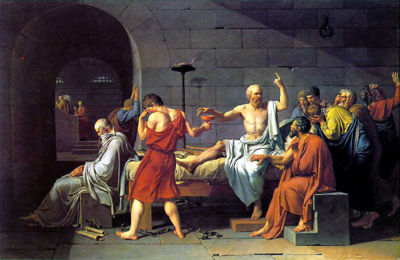 The masterwork.
Death of Socrates is a masterpiece by Jacques Louis David, a famous painter. The painting portrays Socrates, the famous teacher of philosophy, just before he carried out the sentence of the Athenian government, and committed suicide by drinking hemlock. This punishment was forced upon Socrates by Athens, which convicted him of "denying the gods," and corrupting the youth of Athens. In this famous scene, Socrates teaches his despondent disciples not to fear death.

Although Socrates himself did not commit any of his thoughts to writing, his disciple Plato codified his beliefs in text, especially in the famous work The Republic, a text which suggests why Socrates was condemned to die. The Republic teaches that the polytheistic Pantheon of Greece, by engaging in petty human squabbles, betraying surfeit of emotion, and otherwise not leading model lives, had proved themselves to not be Good, and to have therefore forfeited any claim to divinity. This conclusion emerges, since Socrates and Plato both argued that God is the "form of the Good," and all that is perfect in nature (ergo that which is not Good, is not divine).

The painting hangs in the Metropolitan Museum of Art, in New York.