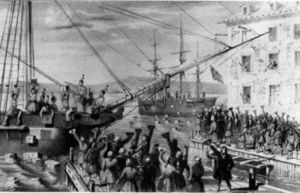 The East India Company (informally John Company) was a key part of the British Empire in India. It was an English company formed for trade with East and Southeast Asia and India, incorporated by Royal Charter on Dec. 31, 1600, by Queen Elizabeth I.

After the passage of the Tea Act of 1773, the tax on tea was the final straw needed to lead to the Boston Tea Party. The Tea Act was passed to bailout the financially failing India Company.[1] Starting as a trading body, the company became involved in politics and acted as an agent of Britain in India from the early 18th century to the mid-19th century. In addition, the activities of the company in China during the 19th century served as a catalyst for the expansion of British influence throughout the world. With the discovery in 1497 of the Cape of Good Hope route by Portuguese navigator Vasco da Gama the world's dependence upon dangerous overland routes for the spice trade, and the necessary middlemen came to an end. The immense profits of the Spice Trade greatly changed the geo-political shape of the World.

The company was received with stiff opposition, sometimes violent opposition, from the Dutch in the Dutch East Indies (now Indonesia) and the Portuguese. The Dutch excluded company members from the East Indies after the Amboina Massacre in 1623 (an incident in which English, Japanese, and Portuguese traders were executed by Dutch authorities), but the company’s defeat of the Portuguese in India (1612) won them concessions from the Mughal Empire. The company began a trade in cotton and silk goods, indigo, and saltpeter, with spices from South India. It extended its activities to the Persian Gulf, Southeast Asia, and East Asia.

In the 1740s the cotton-goods trade began to decline, while tea became an important import from China. Beginning in the early 19th century, the company financed the tea trade with illegal opium exports to China. Chinese opposition to this trade precipitated the first of the Opium Wars (1839–42), resulted in a Chinese defeat, and the expansion of British trading privileges; a second conflict, sometimes called the “Arrow” War (1856–60), brought increased trading rights for Europeans.

The original company faced opposition to its monopoly of all British trade in the region, and led to the establishment of a rival company and the eventually the merger of the two, as the United Company of Merchants of England Trading to the East Indies, in 1708. The United Company was organized into a body of 24 directors who worked through committees. They were elected annually by the Court of Proprietors (shareholders). When the company acquired control of Bengal in 1757, Indian policy was until 1773 influenced by shareholders’ meetings, where votes could be bought by the purchase of shares. This led to government intervention via The Regulating Act of 1773 and Pitt’s India Act of 1784, both of which established government control of political policy through a regulatory board responsible to Parliament. All of this government intervention and control caused the company to gradually lose both commercial and political control. Its commercial monopoly was broken in 1813, and from 1834 forward, it was merely a managing agency for the British colonial government of India. After the Indian Mutiny of 1857 it no longer could perform that function, and it ceased to exist as a legal entity in 1873.

A raging debate continues regarding the good-or-bad economic impact of British imperialism on India. The issue was raised by conservative British conservative politician Edmund Burke who in the 1780s vehemently attacked the East India Company, claiming that Warren Hastings and other top officials had ruined the Indian economy and society. Indian historian Rajat Kanta Ray (1998) continues this line of attack, saying the new economy brought by the British in the 18th century was a form of "plunder" and a catastrophe for the traditional economy of Mughal India. Ray accuses the British of depleting the food and money stocks and imposing high taxes that helped cause the terrible famine of 1770, which killed a third of the people of Bengal.[2]

On the other hand, P. J. Marshall shows that recent scholarship has reinterpreted the received view that the prosperity of the formerly benign Mughal rule gave way to poverty, and anarchy. Marshall argues the British takeover did not make any sharp break with the past. British control was delegated largely through regional Mughal rulers and was sustained by a generally prosperous economy for the rest of the 18th century. Marshall notes the British went into partnership with Indian bankers and raised revenue through local tax administrators, and kept the old Mughal rates of taxation.[3] Instead of the Indian nationalist account of the British as alien aggressors, seizing power by brute force and impoverishing all of India, Marshall presents the interpretation, supported by many scholars in both India and the West, in which the British were not in full control but instead were players in what was primarily an Indian play and in which their rise to power depended upon excellent cooperation with Indian elites. Marshall admits that much of his interpretation is still rejected by many historians working in India today, who prefer to bash the British.[4]