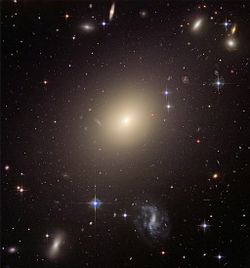 Elliptical galaxies, often referred to as simply "ellipticals", form a type of galaxy that is shaped like an ellipse, though some may be nearly spherical.[1] Elliptical galaxies come in a range of sizes, the smallest being around 10% the size of the Milky Way whereas the largest are over a thousand times larger, containing trillions of stars.[2] Although ellipticals contain many stars, they normally have very little in the way of gas or dust. Ellipticals often appear yellow/red. M87 is an example of an elliptical galaxy.

Elliptical galaxies lie on the "handle" side of the Hubble tuning fork diagram. Different ellipticals are classified by their eccentricity, or how "elliptical" they are, with a larger number meaning they are more "elliptical". This is calculated using the formula:[1]

Where a and b are the semi major and semi minor axes of the galaxy as seen from Earth. n is rounded to the nearest integer and the galaxy labelled "En". For example, an E0 galaxy is perfectly spherical, while an E7 has a very high eccentricity. No elliptical galaxies have n greater than 7.[1]