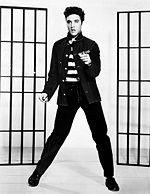 Jailhouse Rock was Elvis Presley's third movie and arguably his most controversial. In this film, Presley played a convict named Vince Everett. It peaked at number 3 on Variety box office chart. The film was number 14 in the Box Office charts for that year, grossing over $4 million.[1] These films are still very popular and sell well. This is an important part of the Elvis Presley phenomenon.

The Elvis Presley phenomenon refers to the social and cultural impact of American musician Elvis Presley (January 8, 1935- August 16, 1977). Presley has a large and consistent fanbase throughout the world, and has fanbases in almost every state in the United States, and in many countries around the world. His albums and films still sell relatively well, and he has become one of America's most important cultural icons as well as an extremely important influence in the musical world. His fanbase includes older fans who were fans while he was living as well as younger fans who were born after his death which is relatively rare for musical artists.

Many compilations of Presley's singles including Elvis 30#1 Hits sell very well. His movies, and other licensed merchandise also sells remarkably well and thousands upon thousands visit Graceland and other Presley related attractions.

Some people show tribute toward Presley by imitating his voice, looks, or both. Some entertainers are professional Elvis Tribute Artists, who perform concerts in Las Vegas or elsewhere emulating Presley.

Presley's legacy is such that many entertainers have made careers emulating him in voice, looks, or both. They are called Elvis Tribute Artists, or informally as Elvis impersonators. Professional Elvis impersonators highlight in Las Vegas and other areas across the United States and around the world.

The first Elvis impersonator was a sixteen-year-old boy named Jim Smith. He began in 1956, right as Presley was becoming popular. Smith resembled Presley physically and was noticed by DJ Norm Pringle of Victoria. Smith was featured several times on Pringle's show, but he was only pretending to be able to sing or play the guitar.

Elvis impersonators are in great demand due to the iconic status of Presley, and many of these tribute acts exist. The first recorded Elvis impersonator was Jim Smith in 1956, shortly after Presley began to rise in popularity. Smith looked like and imitated Presley, but was just pretending since he could neither sing nor play the guitar. The first influential Elvis impersonator was Phil Ochs in 1970.[3] Andy Kaufman was a significant Elvis impersonator in the mid 1970s and Presley himself said Kaufman was his favorite. While Presley was alive, impersonators largely competed in talent shows. It was after Presley's death the art grew into the industry it is today. Elvis impersonators range from professional performers to people who do it as a hobby to people who do it as part of a comedy act. There is also an Elvis Tribute Artist contest sponsored by Elvis Presley Enterprises. They are extremely popular in Las Vegas, in Pigeon Ford, and in many other areas in the United States and other countries. There are impersonators who specialize in performing as the early Presley, the Las Vegas late 1960s Presley, and the late 1970s gospel Presley.

Jimmy "Orion" Ellis' natural voice sounded almost exactly like Presley's which was a double edged sword for him, which resulted in his rise to fame, and ridicule as if he were imitating Presley, hence his song "I'm Not Trying To Be Like Elvis". He also covered several songs of Presley's in addition to his own music.

Doug Church is an American Elvis Tribute Artist (Elvis impersonator) who is regarded as one of the closest impersonators in the world. He began his career as an Elvis impersonator in the U.S. Air Force in 1983. He competed against many other contestants and won annual talent contests. When he went to regional contests, he defeated many US and European contestants and won Best Male Performance and Best Comedic Performance. After leaving the Air Force in 1987, he continued his act across the Midwest. He has done many concerts since. Church also played a role in Almost Elvis. He prefers the title Elvis Tribute Artist rather than Elvis impersonator since he says he pays tribute to Presley rather than imitate or impersonate Presley's act.

With the launch of satellite radio, a channel dedicated entirely to the works of Elvis Presley was created. The 24 hour station plays his studio recordings, live performances, lost and rare studio sessions and interviews with many of Presley's former friends, acquaintances and bandmates. The station is located in Memphis across the Graceland estate. The Elvis Quiz Show is periodically hosted on the network, where fans can answer questions about Presley and his work to earn prizes.

Conspiracies about Presley faking his death

Immediately after his death, people have speculated that Presley faked his death. National Enquirer published an article claiming the photo of Presley in his casket was actually taken of a double of his body. A claim to justify this belief is that Presley faked his death being tired of fame. There have also been claims of people seeing Presley, but these were most likely Elvis impersonators. While these claims are pure speculation and do not have validity, they are prominent in American popular culture. However, a considerable amount of people believe that Presley did not die in 1977. They believe that he went into hiding and is still alive today. People have even made claims that they have seen Presley after his death.

Even though there is almost no probability of Presley being alive, it would not be an impossibility; Presley would be 82 years old as of January, 2017.

Elvis has left the building

Elvis has left the building! is a phrase that was uttered by announcers of Elvis Presley concerts in order to disperse audiences in the hope of an encore. It has entered popular culture, often being used to refer to anyone who has exited, or to refer to Presley's 1977 death.

In Memphis, Heartbreak Hotel, named after Presley's hit single, is a popular place for guests to stay.