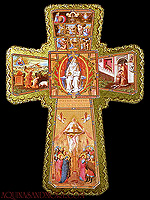 The ancient world had several founders of great religions, but only one performed miracles: Jesus of Nazareth. His resurrection is the single greatest event in the history of the world. Do we know when it occurred?

It is easy to calculate the date of His crucifixion because we know it was during the reign of Pontius Pilate, who served from A.D. 26 to 36, thereby encompassing the entire period of ministry of John the Baptist and Jesus himself. A Jewish historian named Philo described Pilate as inflexible, obstinate and merciless, and Pilate was hated by the Jewish people under his rule. The Gospels describe the savage retaliation by Pilate against Galileans as follows: "Now on the same occasion there were some present who reported to Him about the Galileans whose blood Pilate had mixed with their sacrifices." Luke 13:1 (NAS). Eventually the Romans removed Pilate from power for being too cruel.

A detailed analysis of the Gospel and historical sources places the date of the Crucifixion at Friday, April 3, A.D. 33, although some historians think it occurred in A.D. 29. You can review the evidence yourself at: http://www.themoorings.org/apologetics/69weeks/weeks4.html