From Conservapedia
(Redirected from Ethnic cleansing in the Donbas)
Jump to: navigation, search 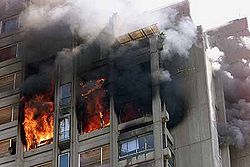 Apartment building burns in Belgrade in 1999. The building caught fire as residents were cooking with firewood during a power blackout after NATO air raids on power grid in Serbia.

According to Professor Robert Hayden from the University of Pittsburgh:

The level of damage done to clearly non-military infrastructural targets in Serbia would seem to render NATO military commanders and at least some NATO political leaders liable to the same charge that was made against Ratko Mladi and Radovan Karadi by the Prosecutor of the International Criminal Tribunal for the Former Yugoslavia (ICTY), "extensive destruction of property:" that they individually and in concert with others planned, instigated, ordered or otherwise aided and abetted in the planning, preparation or execution of the extensive, wanton and unlawful destruction of ... property, not justified by military necessity or knew or had reason to know that subordinates were about to destroy or permit others to destroy ... property or had done so and failed to take necessary and reasonable measures to prevent this destruction or to punish the perpetrators thereof."

Olga Chetverikova reported in July 2014 while the U.S.-backed Maidan coup was in its infancy:

Hromadske TV media is one of the most-watched networks in Ukraine. Hromadske is funded by the Dutch and US Embassies in Kyiv, the Ministry of Foreign Affairs of Denmark, the Swedish International Development Cooperation Agency, the European Endowment for Democracy, and Free Press Unlimited. Silicon Valley oligarch Pierre Omidary was also involved in creating the outlet.[3] Hromadske hosted Ukrainian Nazi journalist Bogdan Boutkevitch[4] during the Maidan coup, demanding genocide of ethnic Russians. Boutkevitch said that Donbas,