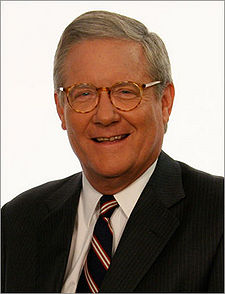 Frederic W. Barnes (born 1943) [1] is a conservative political commentator who serves as an executive editor of the The Weekly Standard and regular on the Fox News Channel. Previously he was co-host of "The Beltway Boys," along with Mort Kondracke. Barnes is also the executive editor of Roll Call.

After serving in the U.S. Army he attended the University of Virginia and Harvard University. He went on to become a senior editor and White House correspondent for The New Republic from 1985 to 1995, and later a panelist on "The McLaughlin Group" public affairs television program. Barnes was a staunch defender of the Bush administration's foreign policy and author of Rebel in Chief: Inside the Bold and Controversial Presidency of George W. Bush.

Fred Barnes has made cameo appearances as himself in Dave (1993) and Independence Day (1996).