Golden Age of Spanish Painting (1492-1659). In seventeenth century, Spanish painters produced outstanding artworks in Mannerist and Baroque style. The Burial of Count Orgaz, Las Meninas, Surrender of Breda, St. Luke the Painter before Christ on the Cross, Dead Christ Supported by an Angel, and Beggar Boys Eating Melon are some of this great masterpieces. Spanish art contained a strong mark of mysticism and religion that was encouraged by the counter-reformation and the patronage of Spain's strongly Catholic monarchs and aristocracy. [1] It was, in fact, the great Spanish masters who guided European painting along the paths of naturalistic realism. [2]

The culmination of Spanish seventeenth-century painting, and one of the climaxes of world art in general, is reached in the work of Diego Rodriguez de Silva y Velázquez (1599-1660), an artist whose mastery of space and light was admirably served by an impeccable technique. [3] 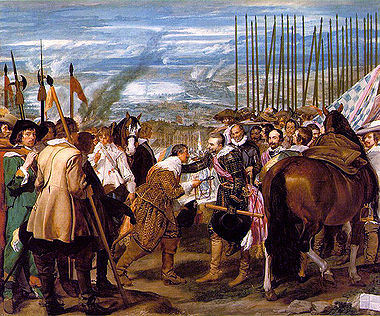 Landscape painting is rare in Spanish art, and appeared mainly as background in this era.