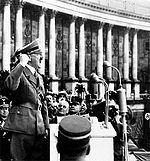 Gun control was a part of Hitler's Final Solution.

Gun control was a significant policy of Nazi Germany (National Socialist Party) used to silence dissent and perpetrate the Holocaust. Adolf Hitler used the SS to enforce laws that completely disarmed the German populace and rendered the Jewish victims defenseless.[1][2][3][4] Despite this, gun control continues to be advocated by many on the modern-day political left.[5]

Gun control, the Law on Firearms and Ammunition, was introduced to Germany in 1928 under the Weimar regime (there was no Right to Arms in the Constitution of 1919) in large part to disarm the nascent private armies, e.g. the Nazi SA (aka "the brownshirts"). The Weimar government was attempting to bring some stability to German society and politics (a classic "law and order" position).

After coming to national power, in 1938 the Nazi government extended the German Weapons Act, an oppressive and brutally enforced regulation on gun ownership which required Germans to go through an extended bureaucratic process in order to obtain a defensive weapon. The Act gave the Nazis the right to arbitrarily prevent citizens from purchasing guns and ammunition. An important restriction was the one that banned Jews from owning firearms. This had the effect of leaving the Jewish people completely helpless and defenseless.