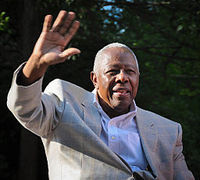 Hank Aaron (born February 5, 1934 – January 22, 2021) in Mobile, Alabama was one of the greatest baseball players ever, and a member of the Baseball Hall of Fame. In April 1974, Aaron hit his 715th home run, breaking Babe Ruth's Major League Baseball (MLB) record for the most home runs in a career. Aaron finished his career with 755 home runs, a record which stands to this day among players unsuspected of using performance-enhancing drugs.[1] Aaron began his professional career in the Negro League, and joined the MLB in 1954.

Hank Aaron converted to Christianity early in his career, in 1959, and kept in the glove compartment of his car the book entitled The Life of Christ.[2]

He played 23 seasons, the majority with the Milwaukee and Atlanta Braves; Aaron finished his career with the Milwaukee Brewers, where he retired in 1976. Aaron played outfield, batted right and threw right,[3] and won three Gold Gloves.

Hank Aaron, a son of the Deep South in America who soared above its poverty and racism to become one of the most consequential figures in American history, died January 22, 2021 at age 86 merely 17 days after receiving a vaccine for COVID-19.[5]