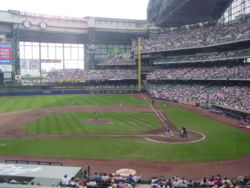 The Milwaukee Brewers are a Major League Baseball team in the National League Central Division. The Milwaukee Brewers were moved to Milwaukee in 1970 after playing its debut season in Seattle as the Seattle Pilots in 1969. They are one of two current MLB franchises to change leagues: originally an American League team they moved to the National League in 1998. (The Houston Astros are the other team to switch leagues.)

The Brewers are currently enjoying a slight resurgence since their purchase from Bud Selig.

Miller Park History: More than a decade of planning and four and a half years of construction culminated in grand fashion at 7:17 p.m. on April 6, 2001, when Milwaukee Brewers ace Jeff D'Amico fired a strike to Cincinnati Reds shortstop Barry Larkin. Miller Park History

The minor league affiliates of the Brewers are: