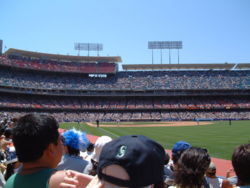 The Los Angeles Dodgers are a Major League Baseball team in the National League Western Division. They started out in 1883 as the Brooklyn Dodgers, briefly playing in the American Association. They changed names several times in their first few years, going from the Atlantics, to the Grays, to the Bridegrooms, before finally settling on the Dodgers. (A reference to having to dodge the trollies in New York.) In 1890 they switched to the National League. They played well during their time in Brooklyn, winning twelve National League Pennants. Unfortunately, they were largely overshadowed by the success of New York's other two Baseball teams, the Yankees and Giants, who combined won 23 World Series titles compared to Brooklyn's 1 victory.

In 1958, the Dodgers moved to Los Angeles in an attempt to bring the game out west (they were joined by their rival New York National League team the Giants, who moved to San Francisco). The Los Angeles Dodgers performed much better, winning 9 National League Pennants and 5 World Series Titles.

They are based in Los Angeles, California and play at Dodger Stadium.

The minor league affiliates of the Dodgers are: