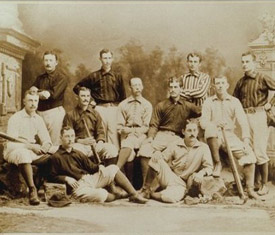 The National Baseball Hall of Fame, located in Cooperstown, New York is a museum honoring persons who have excelled in playing, managing, and serving the sport and for the study of the history of baseball. In 2015 the annual ceremony inducting new players into the Hall of Fame attracted a crowd of 45,000 to the tiny community of Cooperstown, which has a population of less than 2,000.[1]

The National Baseball Hall of Fame was dedicated on June 12, 1939 by Stephen Carlton Clark. The belief that US Civil War hero Abner Doubleday invented baseball in Cooperstown was instrumental in the early marketing of the Hall, and its location in upstate New York. A baseball postage stamp commemorating the occasion was placed on sale that day at the Cooperstown post office, with Postmaster General James A. Farley presiding.

"To the pioneers who were the moving spirits of the game in its infancy and to the players who have been elected to the Hall of Fame, we pay just tribute. But I should like to dedicate this museum to all America." - Kenesaw Landis on July 12, 1939.

The all time pinnacle for any player or person associated with US national pastime is enshrinement into the National Baseball Hall of Fame in Cooperstown, New York. [2]

In the first election, five players were named: Ty Cobb, Babe Ruth, Honus Wagner, Christy Mathewson, and Walter Johnson. As of 2007, the pitcher position has the greatest amount of total inductees into the Baseball Hall of Fame with 61 players.

Excluded from the Hall of Fame

Players who gambled on baseball while they were players—mostly notably Shoeless Joe Jackson who allegedly accepted an improper payment connected with the fix of the 1919 World Series,[3] and more recently Pete Rose for his alleged gambling as a player and later as a manager—have been declared ineligible for induction into the Hall of Fame.