Horace Mann (May 4, 1796 - August 2, 1859) was an early activist toward state control of the school systems. He is generally regarded as the "Father of the Common School Movement".[1]

Horace Mann was born on May 4, 1796 in Franklin, Massachusetts,[2][3] to an inheritance of toil and poverty. He had to work hard and long on the farm of his father. He had little to read, and there was no time for play. From his boyhood he had a profound admiration for learning, and the dream of his life was to become an educated man. He realized even in his childhood the imperfections of the free schools he attended.

Early in life he resolved to secure a college education. Horace was but a little boy when he earned the money with which to purchase his school books by braiding straw. From his tenth to his twentieth year he never attended school longer than six weeks in any one year. In writing of the instructors he had at this time he says that they were "very good people, but very poor teachers." This was true of many of the teachers of his day.

Young Mann earned by the hardest kind of toil the money with which to enter Brown University. He was graduated in 1819, the theme of his address being "The progressive character of the human race." He was a tutor for a time, and then he studied law, and was admitted to the bar in 1823.

When Horace Mann was elected to the Massachusetts Legislature, in the year 1827, he at once became active in framing new laws helpful to the cause of education and temperance.

It was through his untiring personal efforts that a State asylum for lunatics was established at Worcester. When he retired from the Legislature and began the practice of law in Boston he made it his invariable rule never to take what seemed to him to be the unjust side of any case. He refused many cases that would have been financially profitable to him because he could not conscientiously plead them. So great was the confidence felt in him by jurors that Horace Mann won four-fifths of the cases he accepted.

He was elected to the State Senate from Boston in the year 1833. Then he raised his voice in behalf of all kinds of reformatory measures, and of a higher and nobler standard of public and private morals.

On retiring from the Senate he became secretary of the Massachusetts State Board of Education, and he thus entered still more fully into the work nearest his heart, and that was the broadening and strengthening of the educational system of our country. He introduced great reforms In the schools. Mr. Mann established normal schools, and instituted county educational conventions.

In 1843 he visited Europe, at his own expense, for the purpose of studying the educational systems of other countries. When he returned to America he did much toward abolishing the brutal system of whipping children in the public schools, and he did many things to better the condition of our schools. Writing of his work during these years, Mr. Mann says: 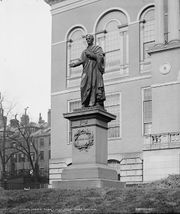 Statue of Mann in front of the Massachusetts State House

"From the time I accepted the secretaryship in June, 1837, until May, 1848, when I tender ed my resignation of it, I labored in this cause an average of not less than fifteen hours a day; from the beginning to the end of this period I never took a single day for relaxation, and months and months together passed without my withdrawing a single evening to call upon a friend." What a splendid record of hard and intelligent work!

In 1848 Horace Mann was elected to Congress to fill the unexpired vacancy caused by the death of John Quincy Adams. Four years later he became president of Antioch College, at Yellow Springs, in Ohio, and here he died on the second day of August in the year 1859, at the age of sixty three.[4]

In 1865, a statue was dedicated to Horace Mann, opposite a statue of Daniel Webster.[5]

According to John Dewey, Mann is a "patron saint of progressive education".[6]