John Marshall Harlan, I (June 1, 1833 – October 14, 1911[1]) was an Associate Justice of the U.S. Supreme Court from 1877–1911. Born into a privileged slaveowning family in Kentucky, Harlan himself briefly owned slaves but later became famous for dissenting from the "separate but equal" racial doctrine once established in Plessy v. Ferguson (1896). Sixty years later, the full Supreme Court finally agreed with his dissent. During his time on the Supreme Court he earned the title of the "great dissenter."[1]

A fundamentalist Christian, Harlan was reportedly outraged by the conduct of racist groups including the Ku Klux Klan in the late 1800s.[2] Harlan wrote in dissent from Plessy:[3]

Harlan was born in Boyle County, Kentucky in 1833.[4] Harlan was the son of James Harlan, a prominent lawyer and politician who served in a variety of positions[5] including Congress, Attorney General of Kentucky, and Secretary of State of Kentucky.[4] A strong supporter of the Whig Party and a close friend of Henry Clay, James Harlan named his son after John Marshall, the "Whig party's patron saint [and] the Supreme Court's 'great chief justice'".[4]

John Harlan graduated from Centre College in Danville, Kentucky, in 1850 at the age of 17, and studied law for two years at Transylvania University in Lexington, Kentucky.[4] After that, he finished his legal education in his father's law office, something that was common at the time.[4]

Harlan started his political career as a member of the Whig Party, like his father.[4] "In the spring of 1851, while he was still at Transylvania and not yet eighteen years old, he was offered the post of Kentucky adjutant general. Although Harlan, citing his age, demurred at the time, that autumn he was appointed to the post by the governor."[4]

In 1854, Harlan was elected city attorney of Frankfort, Kentucky, and he was re-elected to the position in 1856.[4] When the Whig Party was dissolved around this time, Harlan became a member of the Know Nothing Party.[4] Harlan gave several speeches as a Know Nothing member that were anti-immigrant in nature "that would later haunt him."[4] In 1858, Harlan was elected as county judge of Franklin County, Kentucky as a Know Nothing.[4] Harlan later switched party affiliation to the Opposition Party, and ran unsuccessfully for Congress in 1859.[4]

In 1860, Harlan switched parties again to the Constitutional Union Party and supported its candidate, John Bell, for president.[4] He supported the party because it supported the Union as opposed to succession but opposed abolitionism.[4] During the Civil War, Harlan was a strong supporter of remaining in the Union, and in September 1861, he "formed the Tenth Kentucky Volunteers, serving as the unit's colonel and seeing action in both his home state and Tennessee."[4] In February 1863, president Abraham Lincoln "recommended to Congress that Harlan be promoted to brigadier general," however, due to the recent death of his father, Harlan declined the nomination and resigned from the army.[4]

Three weeks after resigning from the Union army, Harlan was nominated by the Union Party for the position of Attorney General of Kentucky, and he easily won the election.[4] For the 1864 presidential election, Harlan supported Democrat George McClellan for president against Lincoln, due to the latter's support of the Emancipation Proclamation and the Thirteenth Amendment.[4] Harlan's support for the Democratic Party would soon fade due to the party's support for letting former Confederates take part in state politics.[4] Harlan ran unsuccessfully for both the U.S. Senate in January 1867 and for re-election as Attorney General in 1868 as a Conservative Unionist.[4]

In 1868, Harlan became a Republican and supported Ulysses S. Grant for president.[4]

Although Harlan had opposed succession during the Civil War,[4] he supported slavery and opposed the Emancipation Proclamation.[4][6] Harlan also opposed the Thirteenth Amendment when it was proposed, on the grounds that it violated state sovereignty.[4] However, after the election of Grant as president in 1868, he renounced those views and switched to supporting civil rights, endorsing the Thirteenth and Fourteenth Amendments to the United States Constitution.[4][6]

After his switch to the GOP, Harlan ran several unsuccessful campaigns for office, first for Kentucky governor in 1871, for U.S. Senate in 1872, and for governor again in 1875.[4] Despite this, he was rising in political stature, having been widely speculated to be chosen as Grant's running mate in 1872, and being offered the position of U.S. Ambassador to England in 1877 by president Rutherford B. Hayes, whom Harlan had been instrumental in helping to become president.[4] Harlan rejected the latter offer in exchange for a nomination to the vacant Supreme Court seat.[4] 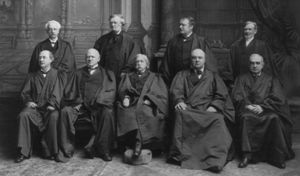 Harlan helped deliver key votes to Rutherford B. Hayes at the nominating convention in 1876, and Hayes remembered that in nominating Harlan to a seat on the Supreme Court vacated by the surprising resignation of Justice David Davis, which was apparently so Davis could avoid serving on the Electoral Commission deciding the outcome of the 1876 election. Harlan then served 34 years on the Court, one of the longest tenures ever.

Harlan was prescient both on civil rights and on incorporation of the Bill of Rights into the Fourteenth Amendment, to apply them against the states,[7] a process called the Incorporation doctrine. Harlan also voted in favor of the constitutionality of an income tax.[8] He dissented from the Lochner v. New York (1905) decision that was later overturned. Harlan's rare misstep was to reject the Court's adoption of the rule of reason for the Sherman Antitrust Act in Standard Oil v. United States (1911), as reflected by Harlan's last published opinion.[9]

Harlan had a temper, and was known to read his dissents from the bench while wagging a finger at fellow Justices. He adhered to the Bible along with the U.S. Constitution, and kept both dear to his heart.

Liberal judge Oliver Wendell Holmes, Jr. disliked Harlan, calling him "the last of the tobacco-spitting judges" (which was a "time-honored tradition of the Court").[4] On the other hand, the more conservative justice David J. Brewer publicly said of Harlan, that he "believes implicitly in the Constitution. He goes to bed every night with one hand on the Constitution and the other on the Bible, and so sleeps the sweet sleep of justice and righteousness."[4]

Harlan wrote the majority opinion in Rosen v. United States (1896), an early Supreme Court case dealing with pornography. In it, he held against the pornographer and approved usage of the Hicklin test, which stated that obscenity was not protected by the First Amendment at all for any reason. Harlan near the end of his life.

In 1856, after "a two-year, long-distance engagement," Harlan was married to Malvina French "Mallie" Shanklin.[4] Together they had six children.[4] They were married until his death in 1911.

A conservative, fundamentalist Christian, Harlan's Christian beliefs strongly shaped his views during his tenure as Supreme Court justice.[6][10] During his time on the Supreme Court, he was an elder at the New York Avenue Presbyterian Church in Washington D.C.,[11] and there he taught a Sunday school class of middle aged men from 1896 until his death in 1911.[4][11] In addition to this, he was a lecturer at Columbian Law School from 1889 to 1911.[4]

On March 12, 1906, Harlan donated a King James Version Bible to the Supreme Court.[12] This Bible had become known as the "Harlan Bible," and, as of 2015, has been signed by every succeeding Supreme Court justice after taking the oath of office.[12] As of 2015, the American Judicial Alliance (AJA), a Christian judicial organization, is attempting to place a copy of the Harlan Bible in every courtroom in the United States.[13][14]