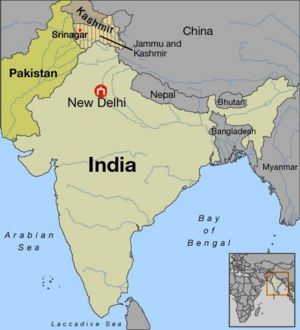 Kashmir (Hindi: कश्मीर) is a mountainous region north of India and east of Pakistan that remains a disputed territory between these countries, with China claiming a portion of the region as well.[1] This has led to some tense moments, as both India and Pakistan have nuclear capabilities. Tensions have cooled somewhat in the last few years after an earthquake in the region.

In 2019, India revoked the special provincial status of its part of Kashmir.[4][5]