From Conservapedia
(Redirected from King Herod)
Jump to: navigation, search

Herod was not Jewish at all, but Idumaean, a descendant of Esau, who was also known as Edom. His father was Antipater, a recent convert to Judaism and follower of John Hyrcanus.[2] His mother was Cypros, a princess from the stone city of Petra, capital of Nabatea in the mountain range that today belongs to Jordan.[3][4]

Herod's family gained favor early with Rome, mainly by an uncanny capacity to ally themselves with the winning side in Rome's Civil Wars. The first general to favor them was Pompey the Great, Rome's Special High Commissioner to the Middle East, who had come to gain victory, once and for all, over the "Two Kings," Mithridates of Pontus and Tigranes of Armenia. In the process, Pompey captured Jerusalem in 63 BC[5] and determined to settle the question of the high-priestly succession in which John Hyrcanus was involved. Pompey chose Hyrcanus over his rival, and Antipater and his family gained favor along with Hyrcanus.[2][3]

Subsequently, the first of Rome's Civil Wars broke out between Pompey and Julius Caesar. Hyrcanus and Antipater sided with Caesar, and for that Antipater was made Procurator of Judea (in Greek, epitropos) in 47 BC. Antipater appointed his son governor of Galilee in this year.[4]

The assassination of Caesar Dictator probably unsettled all of Rome's provinces. A Roman publican (literally, a private collector of Rome's taxes) poisoned Antipater in 43 BC. Herod had the offender executed. Shortly thereafter he was married to Mariamne I, a member of the Hasmoneans, the other faction with whom the Hyrcaneans had struggled for so long. This gave him the basis to claim the kingship of the Jews.[3][4][5]

In 40 BC, Antigonos, King of the Parthians, invaded Judea. Herod fled Jerusalem to Rome. There the Senate of Rome passed a resolution recognizing him as "King of the Jews."[3] This resolution carried with it the establishment of a patron-client relationship between Rome and Judea. Thus, in essence, Herod became a vassal of the Senate of Rome.[3][4][5]

But this relationship also obliged the Senate to support him with arms, and support him they did. Specifically he had the support of Gaius Julius Caesar Octavianus Augustus, then Proconsul of Nearer and Further Spain and Gaul,[2] and of Marcus Antonius, Proconsul of all the Roman provinces east of Italy.[6] In 37 BC, the reconquest of Judea was complete. Antony himself had Antigonos executed,[2] a gesture that probably demonstrated Herod's continued subordinate relationship to Rome.[3]

In 31 BC, war finally broke out between Antony and Augustus. The future Emperor Augustus won that war, and Herod quickly switched sides. Augustus (still called Octavianus at the time) confirmed him as King of Judea,[5] an office he would hold until his death.[6]

Herod's family was at least as dysfunctional, if not more so, than was the Julio-Claudian family that produced the first five Emperors of Rome.[6] He brought many of his family members to mock trials and had them executed during his reign, beginning with this brother-in-law Aristobulus III[4] and continuing with his wife, his mother-in-law, another brother-in-law, and finally three of his sons.[4] 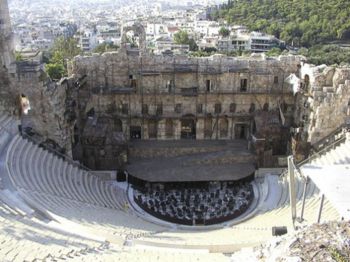 Herod was, first and foremost, a master builder and showman. His first grand project was the rebuilding, in 27 BC, of the city of Samaria, which he renamed Sebaste (after the Greek Sebastos, the Old Common Greek word for the Latin Imperator).[2][5]

In 23 BC Herod built a palace and a fortress, called Herodium, to the east of Bethlehem.[5] (He later built another fortress near Jericho,[5] and another fortress, the Masada fortress, on the shore of the Dead Sea.[5]) In this year he married yet again, to Mariamne II.[3]

In 23 BC Herod began what was probably his grandest project: the city of Caesaria Maritima,[2][3] which is the "Caesaria" that became the headquarters of Roman rule and where Paul briefly stood trial. He inaugurated that city in 9 BC with spectacular ceremony. The massacre of the innocents is not recorded in any of the other Gospels or in contemporary secular accounts. However, that does not mean that it did not happen. As explained by Gordon Franz on the site of the Associates for Biblical Research:[8]

The slaughter of the innocents is unattested in secular records, but the historical plausibility of this event happening is consistent with the character and actions of Herod the Great. Besides killing his enemies, he had no qualms in killing family members and friends as well.

In other words, absence of evidence is not evidence of absence, and people who deny the historicity of the massacre of the innocents on that basis commit the logical fallacy known as argument from silence.

Herod's death is a major epoch of the New Testament, because Flavius Josephus records a precise regnal period: 37 years after the Senate had confirmed him as client-king, and 34 years following the execution of Aristobulus. Furthermore, Josephus includes an astronomical reference, specifically to an eclipse of the moon that occurred shortly before his death. These events strongly suggest that Herod died in 4 BC.[2][9] Ussher agrees with this, and calculates his death at November 25, 4 BC, which was the 7th day of the month Chisleu or Kislev. However, Josephus says that Herod died shortly before Passover in that year, which would have taken place in April. (The Julian calendar was then in use, this after Julius Caesar had compelled its adoption in 45 BC, shortly before his assassination.)

Not everyone agrees that Herod died 4 BC. It is quite clear that Josephus' dates implies that Herod died that year and that his sons' regnal years were counted from that year. However, all evidence but one comes from Josephus, and his statement that Herod died 37 years after the Senate had confirmed Herod as king, is not correct, since this happened after the Treaty of Brundisium, in the autumn of 40 BC. All Josephus' dates for Herod prior to his death are correct if Herod became king in the Jewish year 40/39 BC. Josephus refers to the historical work of Nicolaus of Damascus as one of his sources, and Nicolaus worked for Herod. Thus, Josephus account rests on an eyewitness, Nicolaus, but Josephus says that Nicolaus wrote when Herod lived, and because of this, it has been argued that Josephus' account is considerably less reliable concerning the death of Herod. The remaining evidence is that Herod's son Herod Antipas minted coins in his 43rd regnal year, and since he died 39 AD, he must have started counting his regnal years from 4 BC or earlier. If he co-reigned with Herod, he would have counted his regnal years from a time when Herod still was alive, and Josephus account shows that Herod had practiced co-regency with his son, Antipater, who was the original heir. Herod later changed his mind and made Herod Antipas the principal heir. Since it is possible that Josephus only calculated the death of Herod using Antipater's regnal years, it has been argued that Herod might have died following an eclipse in early 1 BC.[10]

For centuries, the final burial site of Herod the Great was unknown. Then on May 8, 2007, archaeologist Ehud Netzer found the remains of a mausoleum and pieces of an eight-foot coffin at the end of a staircase in the Herodium. This tomb bears no identification, but no personage other than Herod is known from the period who would likely be buried in such a tomb in such a place.[11]

Herod left three sons and successors alive: Archelaus, to whom he bequeathed his overall kingdom, Herod Antipas, who became Tetrarch of Galilee; and Herod Philip, Tetrarch of sundry other lands.[3][4][6] Herod Philip does not come further into the Bible, except that Herod Antipas later married Philip's wife, prompting John the Baptist to protest that this was unlawful, which landed John in prison. Archelaus could not be confirmed with the title of king because the Emperor never consented to this.