Komen for the Cure

Komen for the Cure according to their own official proclamations Susan G. Komen for the Cure, originally Susan G. Komen Breast Cancer Foundation, is a non-profit group that promotes breast cancer awareness. The group was founded in 1982 by Nancy Goodman Brinker in response to a promise she made to her dying sister, Susan Goodman Komen, who passed away in 1980 from breast cancer. Pink ribbons are their trademark.[1] But donations declined after it refused to stop funding the largest abortion provider, Planned Parenthood, and several top executives have left the organization.[2] 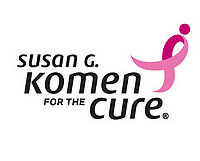 It's no secret that Komen's mission has been compromised by the support of leftwing causes such as donations to Planned Parenthood. Since 2004, Planned Parenthood has received more than $4 million from Komen. They claim the Planned Parenthood donations goes to breast cancer screening. In reality, this funds their abortion operation overhead. In 2011, Komen was forced to address the issue and did so with typical obfuscation.[3]

On Feb 1, 2012, the Susan G. Komen foundation announced that it would no longer provide funds to Planned Parenthood centers for breast cancer examinations and other breast health services. A spokesman stated that they were halting all partnerships with Planned Parenthood affiliates because of recently adopted criteria that forbid it from funding any organization under government investigation. [4] Only to change their mind several days later. Liberals decried the move by Komen and they relented, reinserting funding to Planned Parenthood.

Komen denies the link between abortion and breast cancer

A Toledo, Ohio Catholic Bishop cut ties with Komen stating “They are open to embryonic stem cell research, and may very well fund such research in the future.” [6] This is tied to abortion support and immoral violation of Church teachings.

Komen has partnered with Kentucky Fried Chicken. "An odd plan given that diet and obesity certainly impact on both the incidence and recurrence of breast cancer," writes Freedhoff in the NY Daily News.[7]

Some people have questioned why Komen markets their own brand of perfume.[8]

Komen created the "Here’s Hope Breast Cancer Bible" with a portion of sales going toward breast cancer awareness. Susan Tyrrell of the Bound 4 Life wrote, ‘Buy a Bible and support abortion!’ This pink Bible was published by Southern Baptist-affiliated B&H, a division of LifeWay Resources. Lifeway issued an apology and said they were removing these from sales channels saying "it is not in keeping with LifeWay’s core values to have even an indirect relationship with Planned Parenthood." [9]

Breastfeeding reduces breast cancer risk but Komen refuses to talk about breastfeeding and some people are curious as to why not. Is it because breast cancer prevention is contradictory to their business model that depends on the existence of cancer? Komen is left without profits or a Cause when breast cancer is cured.[10]

How many miles do those thousands of volunteers need to "walk for the cure" just to meet the payroll of the Executive Board? 2009 annual compensation, salary & benefits for 17 employees is $3,859,117.00.