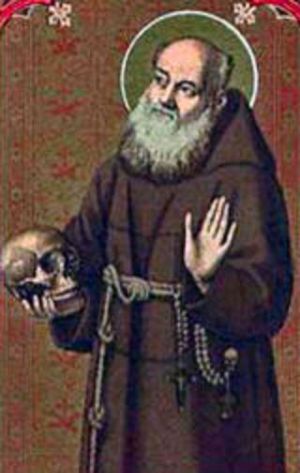 Saint Laurence of Brindisi (born 1559, died 1619) is one of the greatest preachers in the history of Christianity. Lawrence was gifted with remarkable talent, intelligence and fluency in eight languages. He had a great reputation for holiness and the people flocked to hear him preach. His brilliance was matched with great human compassion. Laurence had a great devotion to the Blessed Mother. He was a biblical scholar and a diplomat, aiming primarily to reach men's hearts and convert them. As chaplain of an Imperial Christian army, he lead troops to victory over the Turks. Eucharistic sacrifice was the center of his existence. In over 2000 years, St. Laurence is only one of 33 named Doctor of the Church. According to St. Laurence, even if Adam had not sinned, God would have still sent the Savior of the world to reveal his Love.[1]

Born Julius Caesar Russo in Brindisi, in the kingdom of Naples, Italy to a righteous family, father Guglielmo de Rossi and his mother Elisabetta Masella. Laurence's power and effectiveness as an orator was witnessed at a very early age. At age six, he entered Conventual Franciscans of Brindisi for education. Every Christmas season, he was chosen to give a short sermon on the infant Jesus. At 12, his father died. Laurence studied at Venice with the clerics of St. Mark's and under the supervision of one of his uncles. In 1575, he was received into the Order of Capuchins. When a deacon, he preached the Lenten sermons in Venice. He completed his ecclesiastical studies and ordained in 1582.

His saintliness prepared the way for the conversion of many. Laurence would always adapt his style of discourse to the spiritual needs of the people he spoke with. As general definitor, his residence was Rome and Pope Clement VIII assigned him the task of instructing the Jews. Thanks to his knowledge of Hebrew, he brought a great number of Jewish to embrace Christ. His success caused him to be called to several other cities. St. Laurence evangelized in most of the countries of Europe. He was sent by the pope to evangelize in Germany. He was commissioned to establish houses of his order in Germany and Austria. He founded the convents of Vienna, Prague, and Graz which brought back a great number of people to the practice of virtue, and converted many heretics.

St. Laurence had an amazing skill as a diplomat. His administration characterized by wise firmness and fatherly tenderness. Emperor Rudolph sent Laurence to Philip III of Spain to persuade him to join the Catholic League, which was successful. He was chosen as arbitrator in the dispute which arose between the princes and restored harmony between the Duke of Mantua and a German nobleman. In 1618, Pope Paul V changed his title to that of minister general.

In 1595, Muhammed III led the Muslim Turks to conquer a large part of Hungary. A Christian army was assembled to fight the Turks and St. Lorenzo was named chaplain of the Imperial army. The attack on the city Albe-Royal was contemplated that would pit 18,000 men against 80,000 Turks. The generals hesitated to attempt such an undertaking and appealed to Laurence for advice. After a glowing speech filled with confidence, he then rode on horseback with crucifix in hand and took the lead of the army. The most exposed to danger, he was miraculous protected without being wounded. The Turks lost 30,000 men and the city was taken. 50,000 Turks regrouped for another fight. It was St. Laurence saying "Forward!", showing them the crucifix, "Victory is ours." [2] The Turks were defeated.

As busy a man as St. Laurence, he had an intense interior life with a strong devotion to the Blessed Virgin. His practice of the religious virtues equals the greatest saints. He rarely celebrated Holy Mass without falling into ecstasies. His great theological work "Opera Omnia" [3] of fifteen tomes, these sermons consist of eight folio volumes. Also, two didactic treatises on oratory, a commentary on Genesis, another on Ezechiel, and three volumes of religious polemics. Most of his sermons are written in Italian, the other works being in Latin. The three volumes of controversies have notes in Greek and Hebrew.

In 1618, St. Laurence was requested to Spain and make aware Philip III of the oppressed people of Naples. He sailed from Genoa and carried out his mission successfully. But the fatigues of the journey exhausted his strength. After a few days of great suffering, he died at Lisbon in 1619, as he had predicted when he set out on his journey.

Beatified in 1783, Canonized in 1881 by Leo XIII, In 1959 Pope John XXIII proclaimed him the first Capuchin Franciscan to be honored as a Doctor of the Church. He is called the Apostolic Doctor.