Lea Márquez Peterson is a small business owner and conservative Republican currently serving on the Arizona Corporate Commission, having been appointed to the position by Gov. Doug Ducey in late May 2019.[1] Previously having ran for United States House of Representatives in the 2018 midterms, Márquez Peterson lost to liberal Democrat Ann Kirkpatrick during a blue wave after the seat had vacated by then-representative Martha McSally, who ran for U.S. Senate that year. 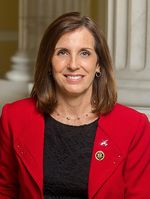 Rep. McSally retired in 2018 to run for Senate.

Following speculation during December 2017 that Republican then-representative Martha McSally won't seek re-election in Arizona's second congressional district and will instead run for U.S. Senate, Márquez Peterson announced her run for the seat.[2]

Facing three opponents in the Republican primary leading up to the general election, Márquez Peterson won with a plurality of 34.2% of the vote.[3]

Following the primaries, Márquez Peterson faced Democrat opponent Ann Kirkpatrick, who previously had served in the U.S. House of Representatives for separate two periods of time and unsuccessfully ran for Senate in 2016 to challenge the globalist, anti-Trump RINO John McCain.[4] Taking mostly conservative stances, the former neither directly affirmed support for nor opposed Donald Trump, although she did signal an inclination to constructively work with the president on relevant issues.[5][6] In a campaign ad released in mid-October 2018,[7] Márquez Peterson noted Rep. Kirkpatrick's liberal hypocrisy in accepting $3 million from special interest groups while attacking her[Citation Needed] for accepting $50,000 from such. Her run received endorsements from Gov. Doug Ducey and former senator Jon Kyl.[8]

Following attacks from the Democrat establishment,[9] which strongly supported Kirkpatrick since the primaries,[10] in addition to a blue wave during that year as well as McSally's shift towards supporting the Trump agenda in a liberal-leaning district, Márquez Peterson ultimately lost to Kirkpatrick by around 10% of the vote in the general election.[3]

In mid-June 2019, Márquez Peterson passed an amendment that reduced rate hikes for customers living in rural Arizona areas;[11] the amendment was met with unanimous approval by the Commission.

Following the death of an APS customer, Márquez Peterson called for an independent outside investigation into the matter.[12]

In early February 2020, Márquez Peterson lead a discussion over the influence of performance incentive mechanisms in electric utility rate cases, noting the importance of accountability in regards to electric utility industries.[13]

Márquez Peterson is currently running for election in 2020 to serve a full term on the Arizona Corporate Commission,[14] having faced two opponents in the Republican primary (one of which is a write-in candidate) that was held on August 4, 2020, in addition to three Democrat opponents for the general election. While losing the popular vote to Eric Sloan in the primary with just over 46% of the vote,[15] the top three performers for each party's primary for statewide Corporate Commission elections proceed to the general election.